Opera comes to CRC and brings lots of laughs 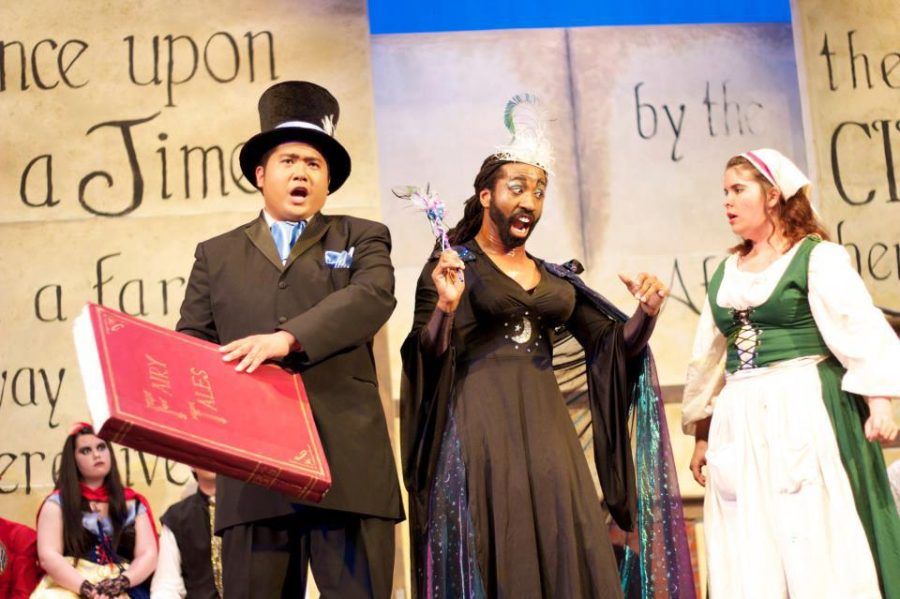 For the first time in the 18-year history of theater at Cosumnes River College, an original Opera by a CRC Professor/Composer was performed by a primarily student cast on the Recital Hall Stage.

“What your Parents Don’t Want You to Know…(about fairy tales),” an opera by CRC music professor Kurt Erickson, opened on April 19 to an enthusiastic crowd.

“Opera at CRC; who’d have thunk?” Erickson said to an applauding audience after being introduced by CRC theater professor and director of the opera, Cheri Fortin.

They both praised the “incredibly collaborative work” on the production involving the music, theater and dance departments.

Then the lights went down, and professional pianist and music director Narmina Sutanova came out into the spotlight.

Sutanova wore a big fancy feathered hat, a glamorous red dress, long black gloves and a giant diamond bauble on her hand. She tossed aside the hat, removed the diamond and the gloves with a dramatic flourish, took her place at the piano and began to play.

The clever story and lyrics by playwright Aaron Loeb were delivered with expertise  by the fairy tale characters on a stage occupied by a giant story book.

“Rabies” was rhymed with “babies” at one point and laughter continuously filled the hall.

The top hat wearing narrator, played by music student Giordan Salangsang, causes some  controversy. He decides that the traditional and less child-friendly German Brothers Grimm tale of Cinderella is too sad.

“Good morning father. Aren’t you supposed to be dead?“ sang Cinderella to her father in a concerned soprano.

In the Grimm tale, Cinderella’s father allowed his daughter to be abused by his new wife.

The narrator makes some changes to the book and viola, “Cinderfather” is dead and Cinderella is a sad orphan and the victim of her wicked stepmother and stepsisters; a solution many of us recognize from Walt Disney’s Cinderella.

Theater arts major Natalie Jones played the wicked stepmother. Her over-the-top costume, makeup and voice were the epitome of what stereotypical opera might look like.

“I’m your wicked stepmother,” she sang. “I’m wicked; it’s like the first word in my name.”

Catherine Cheshire, 19-year-old soprano, played a very un-Disney Cinderella. She was a more realistic portrayal of a lonely, mistreated yet feisty young woman. Her well-trained voice was a delight.

The narrator makes many hilarious adjustments to the book and with the backing of Hansel, Gretel, Red Riding Hood, the Big Bad Wolf and all the other fairy tale characters on stage sings “it’s in the book, it’s in the book.”

The only non-CRC student member of the cast, actor and composer Omari Tau, stole the show with his fluttery antics and portrayal of the Magic Bird/Fairy Godmother. He joined the cast of Disney’s “The Lion King” in 2003 and recently finished a three-year tour as Bonzai the Hyena.

At the post-performance reception, which arrived too soon, cake was served and the audience congratulated the cast and crew on a successful opening night.

Kaitlyn Daley, 20-year-old biology major, played Snow White. She couldn’t stop smiling as she talked about the four months of hard work that was put into the production.

Erickson was relieved and extremely pleased about how the show turned out. He was happy that the audience got the humor and laughed.

If you missed the brief run of “What your Parents Don’t Want You to Know…(about fairy tales)” at CRC, it will be shown on public access TV on a date to be announced.