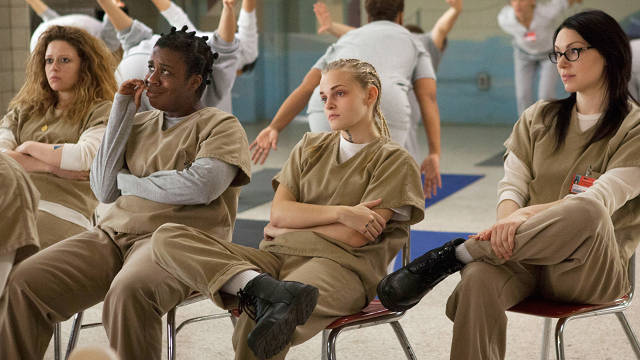 Nicky Nichols, Suzanne "Crazy Eyes" Warren, Tricia Milner and Alex Vause attend an Alcoholics Anonymous meeting while other inmates practice yoga in the background in episode 5 of "Orange is the New Black."

Netflix won its first Emmy on Sept. 22 with its highly-acclaimed series “House of Cards,” but another Netflix original series is worth watching.

The basis of the story is reflective of Kerman’s own experience with prison life, while the television series added drama and problems that were not an actual part of her prison stay.

The series is one of the best available in any distribution format, and instant delivery of the entire season makes it easy to watch at your own pace.

Whether you pace yourself and watch one episode a week or have a marathon viewing, the time spent watching will be well worth your while.

Taylor Schilling (“The Lucky One”) portrays the main character, Piper Chapman, who is a woman in her 30s who is sent to prison for a crime she committed a decade before.

Chapman learns the ins and outs of prison life the hard way, making a series of faux pas almost as soon as she arrived at Litchfield Women’s Prison.

Not one to roll over and give up, Chapman struggles to make it through one bump in the road after another.

Each episode gives viewers a glimpse into the past of one or two of the other characters in the show, both inmates and prison staff, alternating between the past and present, lending viewers information about why some of the characters landed in prison.

With a delightful cast of colorful characters, you are taken on a journey into the lives of these women, which feels like you are watching events in the lives of real people, and not just actors on the screen.

Prison life is depicted in a sometimes humorous light, with many dramatic effects and situations throughout in this engaging series.

Each time an episode ends it’s hard not to watch the next one to find out what happens next in the lives of the women of Litchfield.

Jenji Kohan, the creator, also known for her work on the Showtime series “Weeds,” extends her creative hand from a pot dealing mother to a prison full of women, and does the job well.

While the show could have done without the explicit, sometimes unexpected, sex scenes scattered throughout the series, it wasn’t enough to deter me from watching further.

A second season is set to be released sometime next year, and I can’t wait to see what happens next.