NSA: Are friends with benefits okay? 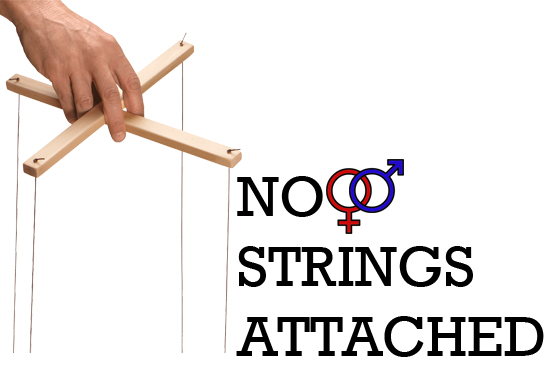 It was only a matter of time that a column titled “No Strings Attached” got to the topic that the title implies: friends with benefits.

No, this isn’t that romantic comedy called “Friends with Benefits,” with Mila Kunis and Justin Timberlake, from a few years ago. Friends with benefits seems like a harmless thing to broach, but it’s a really bad idea.

Sure, you get to fool around with someone and don’t have to worry about all that relationship stuff like dates, anniversaries and all the relationship-centered talk. Sounds like a dream come true, right?

Wrong. Emotional attachments are bound to happen at some point. They always do.

If you take anything from the aforementioned Kunis and Timberlake rom-com, or the similar movie actually titled “No Strings Attached,” with Ashton Kutcher and Natalie Portman, it should be that, in the end feelings of some kind will erupt and bring the so called consequence free fun to an end.

Human beings are emotional creatures. There are the rare few that won’t get attached and can maybe do such an agreement with ease. More power to them.

But, why put yourself through the possibility of emotional turmoil and confusion?

Eventually, if you’re not exclusive, someone is going to find a date or a partner, while the other is left high and dry. While the two of you might have agreed to be fine with that, reality is far harsher than what we can imagine at times.

Crossing that barrier with a friend will invariably change the dynamic of a relationship forevermore, making it hard to go back to being friends. If being a friend with an ex is hard for people, it’s hard to imagine that a booty call gone wrong with a formerly close friend will be any easier to deal with.

It’s hard at times being single, craving that physical connection with another human being and not wanting to go troll the bar for the warmest nearby body.

A friend offers this safe space as you already know them and they know you, and there is no judgement, just a physical connection without the emotion. At least that is the goal.

In the end, more often than not, someone is going to get hurt and it’s just better to not even get into the position that would cause someone to get hurt. Shooting for that ten to one chance that you’ll be the duo that can stay emotion-free isn’t worth it.

We all know that the term “friends with benefits” has always been a wishy-washy subject. There are the people who think that it is a horrible idea, and people who like the idea of it, and I am one of the latter.

I am proud to say that I am breaking the stereotype that women can’t have emotion-free sex.

No, I’m not shallow and no, I don’t have sex with all of my guy friends. However, from past experience I have found that the whole “friends with benefits” thing is actually very fun and enjoyable, if you have the right mind-set that is.

If you catch feelings easily, then sleeping with a friend is not for you. Having a friendship with sexual benefits is a situation for somebody who is not looking for a romantic relationship or commitment.

Me and my male friend are still very much friends today, even though we stopped with the whole benefits part of our friendship. Both of us knew we weren’t looking for a relationship, and that was okay to us.

There was never any point of real love or intimacy between us, just the occasional hook-up to satisfy our raging hormones.

Because, let’s face it, everybody has sexual needs. It’s easy to just call up your friend and ask him or her to come over and “hang out.”

Taking a friendship to the bedroom can also lead you to have more confidence about your sexual experience because you’re more willing to try new things, as you are very comfortable with each other.

Recent research from University of Iowa proves that a purely sexual relationship doesn’t negate the possibility for a real relationship in the future, so long as both people are ready for commitment.

A friends-with-benefits situation can help begin a long-term relationship when you’re not initially concerned with where things are going when you start sleeping with each other. The pressure of commitment is off and sometimes the relationship can unfold naturally, according to the research.

So, for the people who say that being friends with benefits will in the long-run ruin a friendship, that’s because either you or your friend were not psychologically prepared for that type of a friendship.