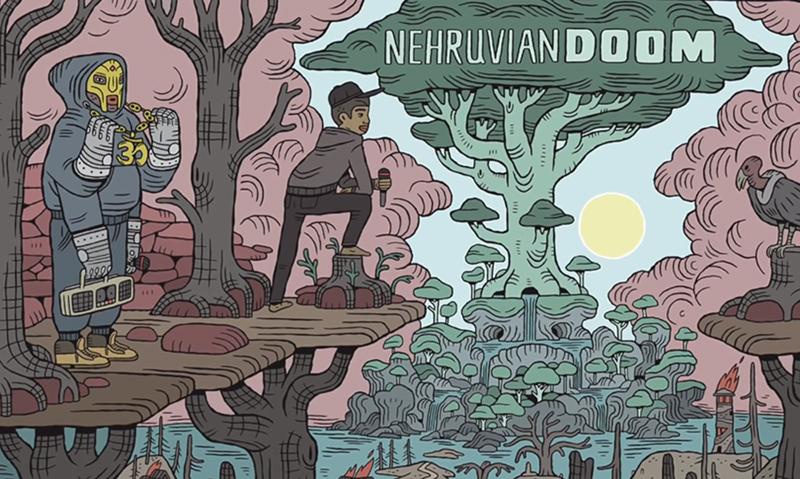 MF DOOM one of, if not the most, influential rappers of the early ’00s has returned for the collaboration album “NehruvianDOOM” with rapper Bishop Nehru.

His 1999 debut, solo release “Operation: Doomsday” slowly gained him an underground following and established him as hip-hop’s mask faced super villain. It also led up to his magnum opus collaboration with producer Madlib, 2004’s “Madvillainy.”

He’s the inspiration for the likes of Earl Sweatshirt, Joey Bada$$ and Tyler, The Creator.

Even with his immense influence, MF DOOM acts as a recluse. Disappearing from social media and popping up to announce a new album after months of saying nothing, and delaying highly anticipated albums for years, such as the follow up to his collaboration with Madlib and a collaboration with Wu-Tang Clan rapper Ghostface Killah.

So, his collaboration with the 18-year-old Bishop Nehru was surprising for a number of reasons, the most apparent being Nehru’s limited exposure.

Prior to this album, Nehru’s portfolio consisted of two mixtapes in which he rapped over beats borrowed from the likes of Madlib, J Dilla and MF DOOM, which was apparently enough to catch the super villain’s attention.

Nehru’s steady improvement continues on “NehruvianDOOM” where he’s given the opportunity to rhyme over beats from MF DOOM created specifically for him while DOOM mainly takes a backseat to handle production.

Nehru carries this album with unique rhymes, like “Me I never had to practice I just wrote and shined/A walking diamond, yet they treat me like feldspar/I’m not as common as you think, you’d better dwell hard” on “Great Things.”

His MF DOOM influence is as clear as ever on the album. The two are unmistakably on the same page in terms of theme and production, which is split between the two.

The production of songs like “Om,” which is punctuated with the titular chant as part of the beat, melds Nehru’s verses with DOOM’s production and chorus as both conceptually present themselves as enlightened beings.

The duo further sync up on “Caskets” where they rhyme with the same intensity to the point that they become one identity.

MF DOOM’s lack of vocal presence on the album may disappoint. However, this “NehruvianDOOM” is meant to showcase Nehru’s talent.

This works to the album’s benefit as DOOM’s three verses on the album are only average for what he is capable of. It poses the question: what constitutes a good MF DOOM verse at this point in his career?

His verses haven’t contained the high level of cleverness or whimsy of his earlier work, as of late. Although, DOOM seems to have cleaned up his delivery from 2012’s “Key’s to the Kuffs” on this album by enunciating more of his words and not breaking up his flow.

“NehruvianDOOM” is a step in the right direction for both artists and a fitting collaboration.

Bishop Nehru can further capitalize on the exposure of collaborating with MF DOOM, as his talent is apparent in both production and rapping. Fans hope this is MF DOOM’s reemerge as hip-hop’s premier super villain and will see him expanding his willingness to release music with a new cast of collaborators.