President Travis and staff reflect on her tenure as retirement looms 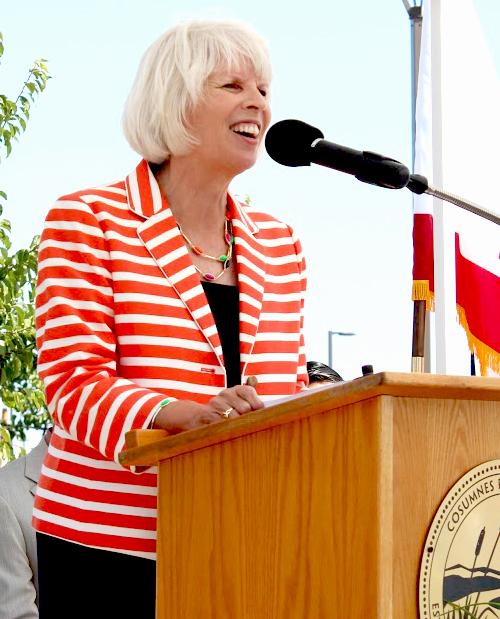 In her tenure as president, Deborah Travis has overseen many of the new construction projects on campus and has spoken at the dedications including for the Elk Grove Center.

As students and professors gear up for finals, anticipating a wrapping up of the semester that will lead them into a well deserved break, Cosumnes River College President Deborah Travis is looking at a much bigger end to the semester.

Travis announced in September that at the end of the fall semester her term as president will come to an end as she retires.

“I believe in public higher education and for 25 years, it has been professionally and personally fulfilling to participate in our students’ success. I came to CRC with extensive experience in instructional programs and workforce education,” Travis said via e-mail. “Becoming the president of Cosumnes River College has been an extraordinary opportunity to be a part of an exemplary college and work with amazing faculty and staff in its growth and service to students.”

In the last five years of serving as president, Travis oversaw many of the large projects and changes that have come to the campus in that time, including the new athletic fields and the building of the Winn Center and Art Gallery.

“Since becoming CRC President in 2009, there are several accomplishments I consider important to our students, college and community,” Travis said. “There are new academic and athletic programs for our students, including Diagnostic Medical Sonography and Women’s Swimming. There are renovated and new learning environments, such as the Science complex, Northeast Technical Buildings, Winn Center, Athletic Fields, Art Gallery and, of course, CRC’s first educational center in Elk Grove.”

Travis said that she is also proud of “CRC’s cooperative leadership, navigation and stability through the recent State financial crisis and our own college’s enrollment reductions,” and that “CRC is resilient and thriving once again because of an enduring collegial spirit.”

As the campus Public Information and Communication Officer, Kristie West worked closely with President Travis over the last few years.

“I have known President Travis for 20 years and this is the second opportunity I’ve had to work with her,” West said. “The last five and a half years have been wonderful for me as PIO because she really understands the importance of my job and it has allowed me to push the traditional boundaries of marketing at CRC.”

West was not the only one to speak positively of Travis. Liz Belyea, dean of the Kinesiology, Health and Athletics department, said that Travis was very supportive of their program.

“President Travis will be sorely missed by all in our Physical Education and Athletic department. She understood the value of learning through sport and physical activity,” Belyea said. “Her continued support of our programs through her presidency is very much appreciated. On behalf of all of us in our department, we wish her the very best in retirement.”

Vice President of Student Services and Enrollment Management Celia Esposito-Noy said that “it has been a pleasure working with President Travis for the past six years” and also mentioned the leadership Travis provided for many of the initiatives that led to the new campus facilities. While the new facilities were a big thing, Esposito-Noy said there was another area that Travis excelled.

“Foremost, she has been a champion for our students always asking us to do our very best for them, to implement innovative programs in support of student success and to always honor and respect our students and the community.  She will be missed,” Esposito-Noy said.

Cory Wathen, vice president of administrative services and student support, said Travis was instrumental in leading the college through a very tough time.

“Dr. Travis has served CRC during a very exciting and challenging time…” Wathen said. “She has also navigated the college through a very difficult budget crisis. Her experienced leadership and attention to detail have served the college very well during a significant period in the life of the college.”

When asked to sum up Travis and her time as president in just a few words, West said she was “innovative” and a “strong leader who is passionate about [the] community college and its students.”

“President Travis is a great leader, motivator and innovator and working with someone like that is an amazing experience,” West said. “I will always treasure our collaboration and friendship.”