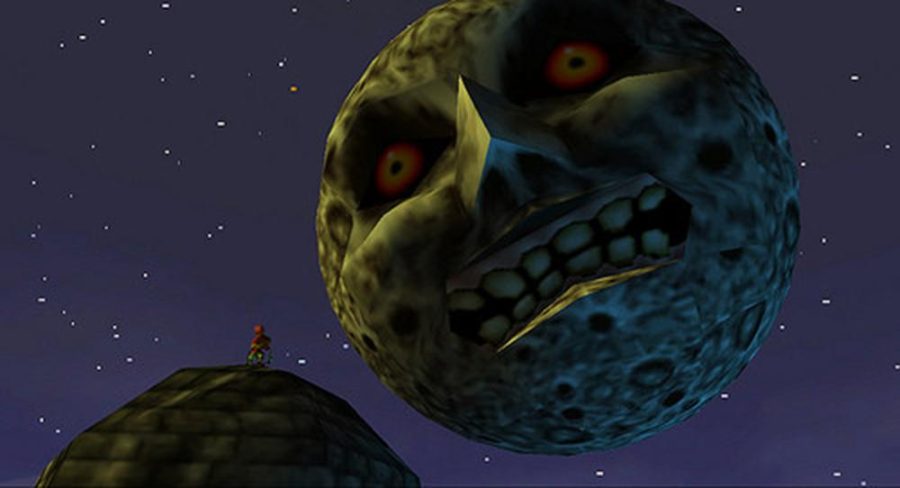 A scary faced moon, a creepy mask salesman, the land of Termina and the song of time should bring back a lot of memories for fans of the long running “The Legend of Zelda” video game series. Memories that Nintendo hoped to capture with the release of “The Legend of Zelda: Majora’s Mask 3D” on the Nintendo 3DS.

An updated version of the original Nintendo 64 “The Legend of Zelda: Majora’s Mask,” the 3DS remastered version is remarkable as it has the same great gameplay with beautiful new graphics.

The storyline is the same as in the previous edition. The hero Link must race through the land of Termina over the course of three days in hopes of saving the world, all while travelling through various temples, collecting new items for his quest and defeating bosses.

Just like the original, Link must warp back in time to relive the three days over and over in order to prevent the world of Termina from ending.

This game is everything fans of the original will remember, while still adding things that set it apart. Some of these additions arguably make the game easier than the original version.

Located in the town’s clock tower is a new item called the Sheikah Stone that will tell the player where to go if they are lost or just can’t figure out a part of a puzzle. It helps with the typical frustrations that come with the series and its sometimes complicated puzzles.

Alongside the Sheikah Stone, there is another major addition to the game. The fan-favorite fishing option from games like “The Legend of Zelda: Ocarina of Time” has been added to the remastered game.

Slight differences are prominent throughout the game. From different dialogue to different terrain to even differences in the opening scene where Link falls through to the world of Termina.

Playing through each of the dungeons, moving the player closer to the final boss battle with the Majora’s Mask-wearing Skull Kid, it became apparent that the boss battles were slightly easier in the 3DS version compared to the N64 original.

Perhaps it could be the fact that I played the game before and remembered how to fight the bosses, or it could be they changed how difficult the actual battles are. Either way, the bosses come off as easier to defeat in the new version.

Playing though the game brought back fond memories of “The Legend of Zelda” series as well as the frustrations with the temples and the puzzles that are a mainstay of the game series.

“The Legend of Zelda: Majora’s Mask 3D” remaster is a worthy addition to the series and it’s worth picking up for nostalgic fans of the series.