Franchise takes a ride down memory lane for seventh film 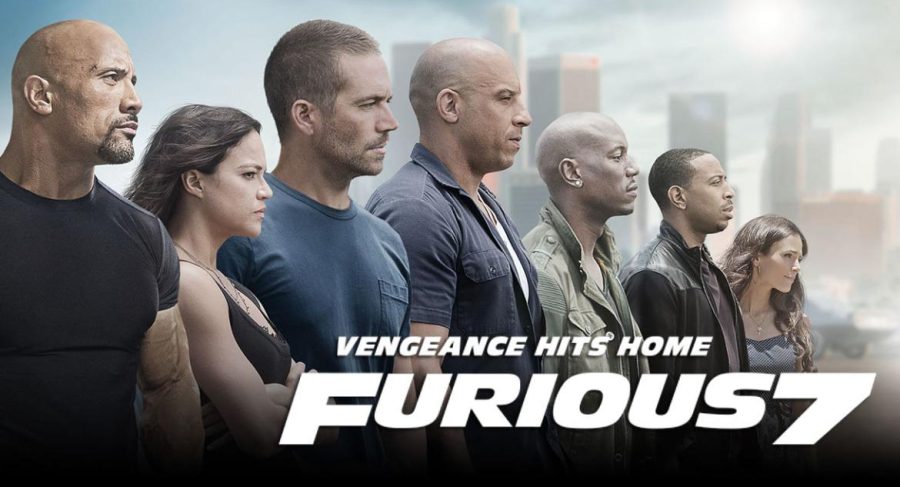 While many movies become mundane after a sequel or two, the “Fast and Furious” series has managed to keep the interest of millions of loyal fans for over 14 years.

The latest installment, “Furious 7” was released on April 3 and set box office records with a $143 million dollar opening weekend in the United States alone, according to CNN Money.

Sadly, “Furious 7” just did not live up to past films in the series.

While all of the car chases, fight sequences and focus on the franchise’s main theme of family were all present, something was was missing.

Perhaps the loss of a member of that family threw the rest of the cast off.

In late 2013, tragedy rocked the cast as one of the main actors Paul Walker, who played Brian O’Connor, passed away after his porsche struck a pole and caught fire..

Walker’s untimely death shocked and saddened fans and his castmates and put the movie’s production on hold. Originally scheduled for release in July 2014, the delay left fans curious about how the film would address the passing of Walker.

The film’s dialog was also an issue as it  seemed significantly cheesier than its predecessors and its plot lacked a spill-over of excitement from “Fast Five” and “Fast and Furious 6.”

The antagonist of “Furious 7” was Deckard Shaw, played by Jason Statham, the brother of the sixth movie’s villain Owen Shaw coming back to avenge his brother’s death.

While this could have been an exciting continuation, there was not enough development of the character for it to matter.

Another major point of disappointment was how the film almost completely ignored the death of Han played by Sung Kang in the previous films. Han was referenced a few times and connections between the gang and the third film “The Fast and the Furious: Tokyo Drift,” where Han first appeared, were finally present, but again it was brushed over.

That was just one of many opportunities to deepen the series’s backstory and make connections between the film that were missed.

The film was not a total flop. It was entertaining for its entire two and a half hours but there is just no comparison between it and the last few installments.

Most of the run time seemed like an homage to Walker and his character, whether that was works or not will depend on the viewer.

Since half the film was produced before Walker’s passing and there were rewrites of the scrip after his death, it would be interesting to see how different the film was meant to be before his loss.

The end of the movie paid tribute to Walker’s life and featured flashbacks of him from throughout the years. Creatively, it also seemed to give the cast a chance to speak as themselves and their characters in wishing Walker goodbye.

The film’s most memorable and touching lines came from that tribute, which no doubt connected with many fans and might have even brought them to tears.

With seven majorly successful movies under their belt the “Fast and Furious” franchise is showing no signs of slowing down and even with the shortcomings of “Furious 7,” I will continue the ride with them.