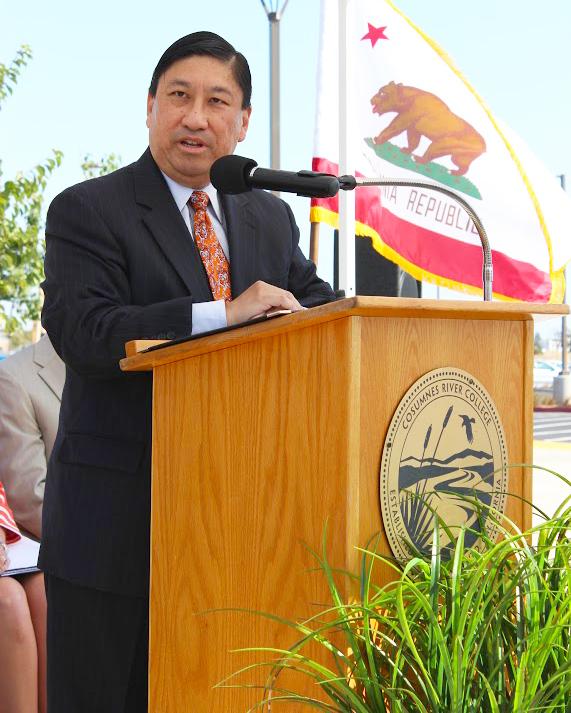 Interim President Whitney Yamamura speaks to faculty members and guests at the dedication of the Elk Grove Center in August 2013. As Vice President of Instruction and Student Learning, Yamamura played a key role in the formation of the center.

However, the process of finding and hiring a person with the right qualifications is not a short process and the campus needed someone to step up and man the helm while the search was underway.

“I didn’t express an interest for the permanent position, so [Los Rios Chancellor Brian King] asked if I would be interested in interim, and I said I would be willing to serve,” said Yamamura, who took up the title of interim president for the spring 2015 semester. “My term is the start of the semester to the end of the semester.”

While Yamamura’s temporary promotion to interim president came at the simple request of King, his path to the top was not quite as straightforward.

Rewind to 1989, when Yamamura was a master’s candidate at Sac State.

“Los Rios created a minority and women teaching internship program … so I applied and I became an intern [at American River College],” Yamamura said. “The very next semester, the dean of the department asked me to teach part time, so I taught part time for two years.”

Following his introduction into teaching, Yamamura said he took advantage of and applied for positions that opened up along the faculty ladder, which eventually led him to apply for vice president of instruction at CRC in 2008.

“If you’re in the same district, and you’re a tenured faculty member and you become a manager, you can ask to go back to the classroom … if you’re hired as a manager into a district, you don’t have rights to go back to the classroom,” Yamamura said. “I’m confident in my skills and abilities, but there’s a nice little safety valve there … and lo and behold, June of 2008, landed as vice president of instruction.”

Yamamura said that because his term as interim president is short, his time will mostly consist of keeping the college afloat and ensuring the accreditation process goes smoothly.

In the nearly seven years he has worked at CRC, though, Yamamura has accomplished more than the routine. Most notably, Yamamura was a key figure in getting CRC’s Elk Grove Center established.

“Much of the success of this building, and all the features that it has, emanates from Whitney Yamamura. It was his vision,” Montanez said.

Nye said Yamamura has an impeccable work ethic, but also has a fun side that many of those who don’t work closely with him might not see.

“Every year a group of us goes down to a Raiders game,” Nye said. “We have a retreat where the management team gets together … and it’s always at his house. We also do our white elephant holiday party at his place.”

Despite his successes and the praise of his colleagues, Yamamura remains humble and attributes his success to serendipity.

“I’ve been very fortunate. I started off thinking I was going to be a financial planner, but getting into the industry it seemed like it was very sales focused, so I had to do a little soul searching,” Yamamura said. “Ever since I made that choice to go back to get my master’s, everything else has sort of been by luck or serendipity. I feel very blessed in life.”