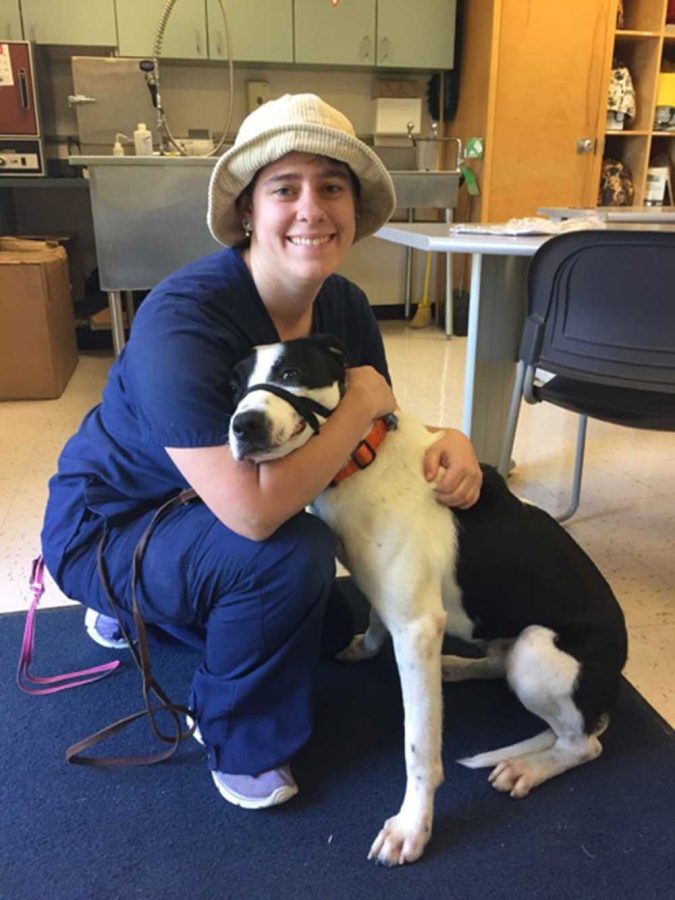 Veterinary tech major Alex Cahill was paired with Cosmo the dog and Annie the cat at the start of the fall semester. Cahill was responsible for training and caring for Cosmo and Annie to prepare them for adoption.

Each year the veterinary technology department accepts dogs and cats from shelters to take into their program for students to train with, care for and prepare for a loving family to adopt.

On April 26, from 11 a.m. to 5 p.m. in front of their department, the Vet Tech program will hold their annual adoption day, where members of the public can come meet the animals and adopt them. The dogs have a set adoption fee of $125 and cats are $50, with all the adoption proceeds going towards covering the cost of the animals’ medical expenses while in the program including surgery, vaccines and other medical needs.

All the animals are neutered, current on vaccinations as of August, micro-chipped and the fee for owners to register them is covered, said Animal Health Instructor Technician Cheryl Buch.

The department has held adoptions for over 30 years, with Buch’s class of 1981 being the first to hold an adoption. Buch said that adoptions were done differently in the past.

“They used to have auctions for the animals. I attended the auction when I was a first year student, and granted prices were cheaper then, but it was really sad because they were selling cats for 50 cents because no one would bid on them,” Buch said. “So we decided we want people to understand the animals have value in and of themselves but also to us. We put a lot of time, energy and expense into them so we decided to make it an adoption with a set fee.”

Buch said that students work to care for and train the animals all year and she feels that the animals have given so much to the students and program that the best thing to do for them is to find them a home.

For the animals that do get adopted, they do not go home with their new families right away. 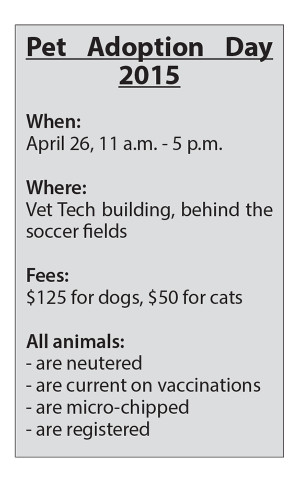 “Some people get so excited about their new adoption they start planning right away to get supplies to take care of them which is part of the reason we don’t release the animals on the day of the adoption,” Buch said. “We don’t want it to be an impulse buy and we want them to prepare for the animals to come home.”

The animals are freshly bathed and sent to their new home in a week with a bag of food from the Vet Tech department to help with the transition, Buch said.

When it comes to adopting the animals, vet tech students get the first choice before staff and others on campus.

“The students are the ones who bond with the animals because they have more contact time,” said Veterinary Technical Program Director Christopher Impinna. “The instructors care for the animals but don’t spend as much time so they don’t get as attached.”

Impinna said he thinks a lot of people only think of the basics, such as feeding and walking the animals, but do not consider the long run expenses.

“It’s important they have the ability to give a safe environment. That doesn’t mean a big fancy house in the country. It could be an apartment where they go for walks everyday. It could be a small house with a backyard,” Impinna said. “They should care and be able to financially care for the animals, meaning food and medications.”

Students have two weeks  after adoption day to find a home for the animals that go unadopted, otherwise they go back to the shelter.

“The students go out and hustle to find them a home because we don’t want to send them back to the shelter,” Buch said. “We do close down for the summer and there is no one here to take care of them.”

Buch said students don’t want to see the animals go back to the shelter so they find homes by word of mouth or email chains through friends.

“We’ve only had to return animals to the pound once that I can think of, for not being adopted,” Buch said. “There is no guarantee it wont happen again so I don’t let the students get too comfy with the idea it wont happen.”

While there is the reality that animals might have to go back, Impinna said they always hope they’ll be successful with adoptions.

“We’re never 100 percent successful, but we always hope we have 100 percent [success],” Impinna said. “Sometimes they all go home that day and sometimes they go home one or two weeks after. It’s a good thing for the community and animals. I have no fears about it at all.”

Adoption day is open to anyone and the public is invited to come help the animals find homes.

“We don’t get so many people here that we can pick and choose who they get. We’re lucky if we get maybe 40 people out here and considering there are 20 animals that’s not enough,” Buch said.

There are other issues outside of the amount of attendees that can lead to animals not being adopted.

“Frequently we are having a harder time placing cats, we always have cats left over. Sometimes dogs, but always cats,” Buch said. “Even though we have young cats that are right around a year of age, people want little kittens who are eight weeks old and it’s harder to place adult cats.”

Alex Cahill, 22, a veterinary technician major is in her third year. Cahill was assigned to be responsible Cosmo, a dog, and Annie, a cat.

“Annie is sweet and loves to cuddle. She loves to play with toys, the laser points or something you can drag on a string. She also loves soft pillows and sitting in the windowsill. She is a sunshine kitty,” Cahill said.

Each animal has their own distinct personality, making it easier for the adopters to find a pet that matches them.

“We have one really goofy cat, Gandalf, he is so goofy,” Buch said. “He will take and drag his bed around. If you’ve seen videos of lions dragging an antelope off between their legs, that’s how he does it with his bed.”