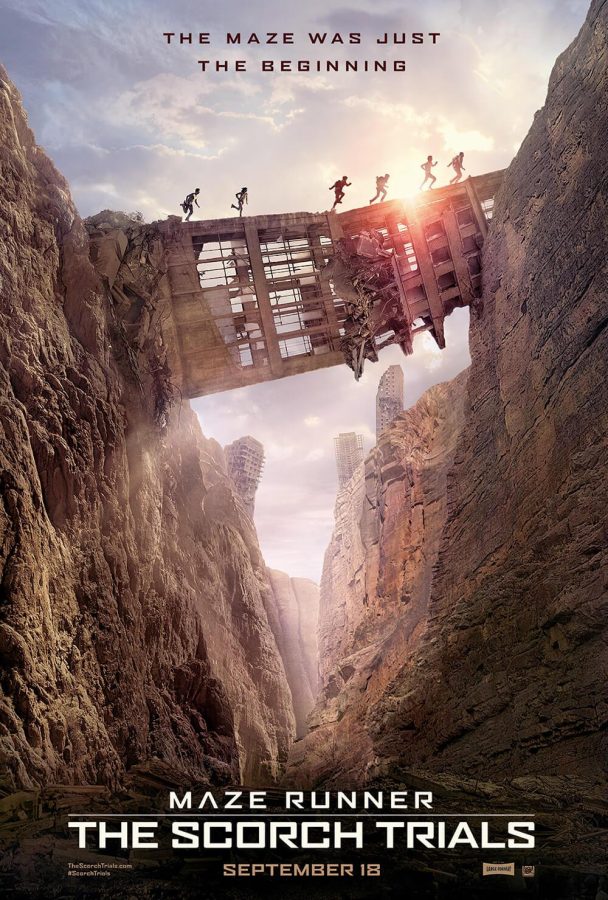 The thrilling sequel “Maze Runner: Scorch Trials” that features Thomas, portrayed by Dylan O’Brien, as he continues his distaste for the systems of control. This film was definitely jaw dropping with all the twist and turns and action-packed scenes, it’s nothing like the other young adult, post-apocalyptic films making their way to theatres.

The film differed by not focusing on the cliches of love or heroism. It’s based on a science fiction novel series, which involves young boys trying to find themselves while fighting to stay alive and away from WCKD: World Catastrophe Killzone Department.

Thomas and his friends discover that they have been subjects in a series of experimental trials by WCKD. This department is searching for a cure to a virus that has wiped out the Earth’s population. There’s something the teenagers have that the organization is after and they’re willing to wipe out a total generation to get it.

Wes Ball, director of “The Maze Runner” and ”Beginners,” has created an action-packed thriller, which fuels you with excitement that keeps you from sitting still in your seat. The movie starts off exactly where it left off in “The Maze Runner.” Thomas and his friends, who escaped from the Glade, are in a helicopter touching down in an isolated, vast desert, called The Scorch. The men are then taken to a medical warehouse facility where they felt safe from WCKD, but with Thomas’s intuition he knows something is wrong. He becomes increasingly suspicious of the smooth-talking villain Mr. Janson, played by actor Aidan Gillen, from “Game Of Thrones” and “The Dark Knight Rises.”

Like back in the maze, Thomas had an inexplicable plan for an escape. He and his crew quickly had the ability to breakout into the wasteland of The Scorch where they faced sand storms and desolated cities filled with flare zombies that are the results of the virus. Their hopes are to find the resistance army whom they think will help them into the safelands.

The “Scorch Trials” is able to give you more action than ever. In the first production of “The Maze Runner,” the setting was solely in the maze, but in the sequel, the setting is imaginative and vast. Besides the variety in setting, Ball introduces you to a variety of characters, which is a nice change from the small handful of characters in the previous film.

A friend that the group makes along their journey is Jorge, played by Giancarlo Esposito, who appeared in “Alex Cross,” and “Last Holiday.” Esposito is a diverse actor and did an excellent job in displaying his role of leadership and bravery.

Unlike the other post-apocalyptic films like “Divergent” and “ Hunger Games,” “Maze Runner” has more grit. The stakes the characters face and how they feel are straightforward. You know Thomas and his friends want to be free. So they keep running with no destination, which seems like something a common teenager might do.

“Maze Runner: Scorch Trials” shows that the search for a cure can bring out questionable actions, even in those you think are your friend. The display of trust and loyalty is amazing to watch in this film, but it also shows you where one’s loyalty lies. This is nothing short from a revolutionary film in the young-adult drama and it’s an absolute must see.