Decades of Darkness takes on new life in the dark 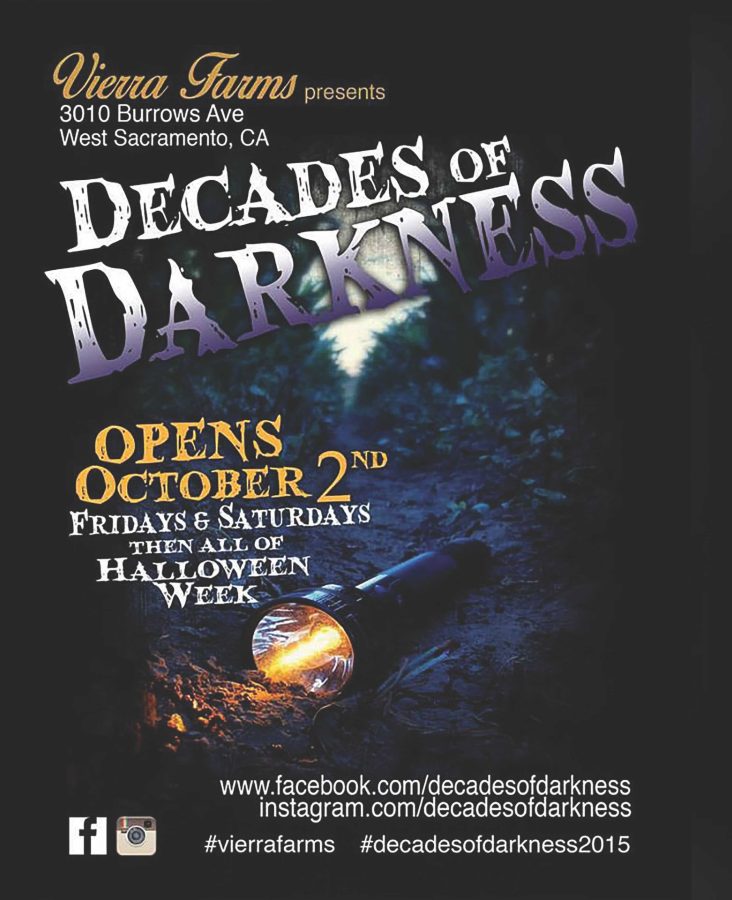 Decades of Darkness is open all of Halloween week

During the day, the West Sacramento Vierra Farms offers a family friendly environment where kids can ride farm animals and pick out pumpkins in the patch. Once the sun goes down the place takes on a new life.

That’s because the farm is home to Decades of Darkness, a haunted maze that was intended to terrify groups at a time.

Each year the maze includes performers within the maze as well as individuals that help scare the crowd before they enter the maze. This year some of those performers are Cosumnes River College students.

“I’m a tour guide and it’s a lot of fun,” said 24-year-old theater major Michelle Nadra. “I know what’s going to happen, but I still get scared.”

With the level of scares that can be found within the maze, Nadra said she would recommend that children be at least 10-years-old, depending on the child.

David Carter, 26, studying film production and stage acting said that he found out about the job openings for Decades of Darkness through Craigslist.

“I was perusing the talent gig section and I happened across an actor training program in west Sacramento,” said Carter. “I went, auditioned, and was cast as a tour guide.”

He said that the performers have received great feedback from guests and management and that “the creativity the employees possess is like an incubator for [Carter’s] own process.”

As a tour guide, Carter leads people through the 25 minute haunted maze tour where they have a chance to see various performers roaming acres of land dressed as different creatures, sometimes just staring through the corn maze or popping out when least expected.

Some found the maze through word of mouth.

“I found out about this opportunity in class from David, and now I love it so much,” said Larry Glenn, 22-year-old theatre and art major.  Glenn started off as a tour guide like Carter and Nadra but got cast changed to scare people within the maze.

“These past weekends turnout have been pretty great,” Carter said. “It seems the overall likeability and enjoyment of the maze is pretty well received. It’s been greenlit for next year.”

The haunted maze will be open every night until Nov. 1. General admission is $15 and can be purchased online or at their box office.