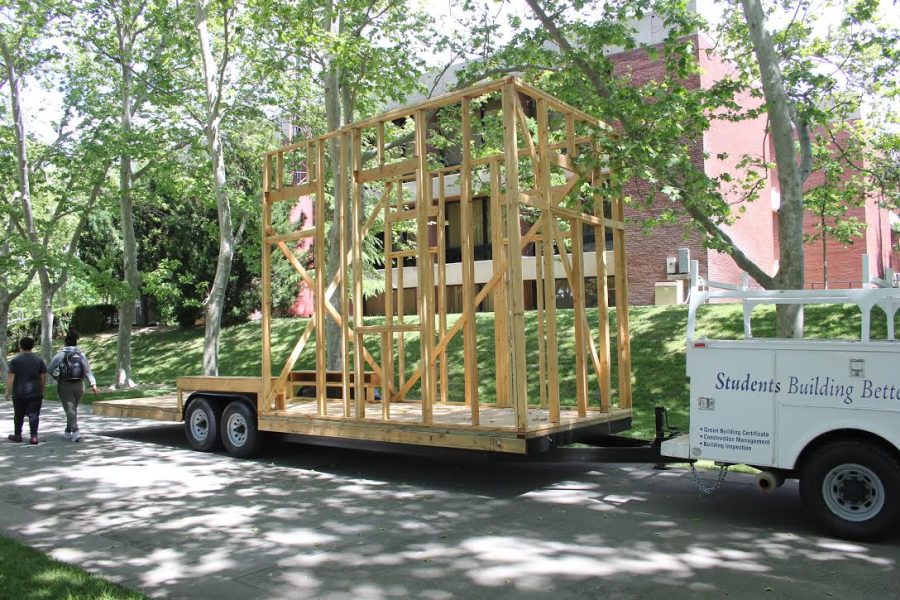 CRC will be hosting the tiny house competition in October. Construction and architecture students have already began putting up the framework.

Under 300 square feet on average, tiny houses have made a big impact on the idea of living sustainably. Now students can see first hand what a tiny house is like at the Tiny House Competition on Oct. 15.

Cosumnes River College will be hosting the competition put on by SMUD that features 10 colleges competing to build the best tiny house under 400 square feet.

“We have a philosophy here and that’s do as much as you can in the smallest amount of space you can,” said Architecture Professor John Ellis.

The house will roughly be about 240 to 250 square feet. Although the maximum amount of space allowed is 400 square feet.

The tiny house competition started in Fall 2014 and it’s a two year long project and so far they’ve been actually working on the tiny house for just about a year, Ellis said.

“The first semester we attended seminars and meetings about the project, then the next semester we started designing the structure, then the semester after we started with construction documents, or blueprints, and Brenda was in that class and we ended up choosing her document,” Ellis said.

Brenda Delgado a 24-year-old architecture major is the lead architect and designer of the tiny house. Brenda also said she has taken over 30 courses for architecture both here at CRC and at San Joaquin Delta College.

“If I am going to be at school I might as well take classes that will help me out in architecture, and I guess it did help me out because I got to design the tiny house,” said Delgado.

The project will end up costing a minimum of $25,000, which has been met by a grant and design competitions the architecture students have entered and won.

“We are budgeting $25,000 for it,” Ellis said. “That is the minimum that SMUD is letting competitors spend, and they allow you to spend $60,000 but every thousand after the $25,000 you get penalized in the judging process.”

Some of the supplies and appliances will be donated by sponsors, Ellis said.

“We’ll get Home Depot or someone to see if they would let us loan a toilet for the competition and have it advertised that the store provided the toilet for us,” Ellis said.

Another key element to the design of the tiny house is that it has to be a zero energy home, which means that the house must be self-sustainable and receive no outside energy.

Professor of construction Ryan Connally, said that going zero-energy is only harder because it requires more thought and cooperation from everyone involved.

“In mainstream construction you have the insulators there just to insulate and they don’t necessarily care what the plumbers are doing or what the builders are doing, but to build a zero-energy house they all need to work together to achieve it,” Connally said.

Although the thought process can be kind of difficult, which Delgado said she is learning about with the creation of the tiny house.

“Some of the difficulties with the project were zero-energy, and fitting everything into such a small space because it’s only 30-by-8 and a half feet and the height max is only 13 feet and that’s including the trailer,” Delgado said.

She also said that the project is preparing her for what life as an architect might be like.

“It is a big learning experience, like a reality check,” Delgado said.