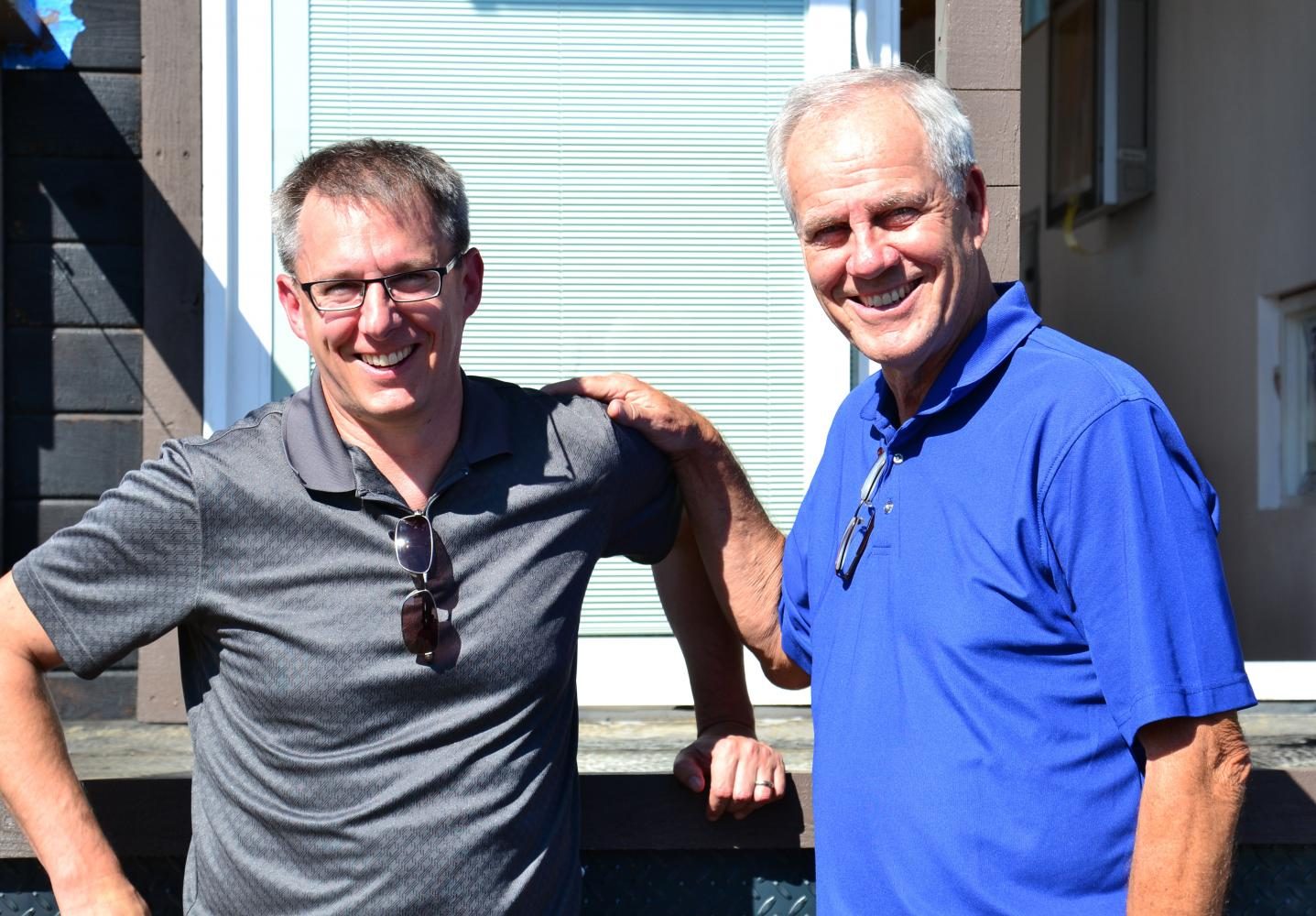 Professor Jason Ellis and father John Ellis meet with students in the construction area to work on the tiny house project.

It’s not a regularity when two brothers are both professors on the same college campus. What’s even more of an irregularity is when one of those brothers replaces his retired father in the same exact program that his father oversaw.

At the end of the 2016 spring semester, former Cosumnes River College Architecture Professor John Ellis retired from his position, leaving the spot open to a lucky individual who was more than qualified to fill it, and also leaving Brandon Ellis, kinesiology professor at CRC and John’s son, the only Ellis on campus. But not for long.

At the beginning of this semester, Jason Ellis, an architect and also John Ellis’ son, joined his brother Brandon in pursuing a teaching career and carrying on the Ellis family legacy at CRC. As soon as the spot opened up, Jason applied for it and was hired as the new architect professor.

“I love it so far, it’s a totally different experience,” said Jason Ellis about his first few weeks at CRC. “I love being an architect and designing buildings, but I’ve been really excited to see the students’ passion and enthusiasm.”

Taking this family legacy back even further, Jason Ellis was once a student at CRC and his father John was once his professor. However, he was very clear that his father never pushed architecture onto him.

“He always let us make our own decisions and never pushed me one way or the other,” said Jason Ellis. “My father didn’t seem extremely enthused when I told him I was majoring in architecture, but my mother later told me he was ecstatic about it.”

John Ellis agrees that Jason Ellis made the decision on his own to take up architecture as his career.

“When Jason told me he was taking up architecture, he said, ‘Dad, what’s wrong, you don’t seem that enthused about it,’ but of course I was,” John Ellis said, “I was overjoyed by it. But what was most important was that my kids found something that they love to do.”

John Ellis explained that his love for architecture and his job is what motivated his sons to find a career path that made them feel good at the end of the day, and not just a job that put food on the table.

“I was never that father that came home every night from his job complaining about how much I hated it, and I think that Jason and Brandon saw that,” said John Ellis. “I always repeated a quote that says, ‘If you find something you love doing, then you’ll never work a day in your life.’”

Like any first-year teacher, the first semester can be extremely busy, stressful and difficult to get into the swing of things. Jason Ellis explains how his father is helping coach him through a few things.

“There is a ton of work to be done, so I’m tapping into any resource I possibly can, and he’s the best one I have,” said Jason Ellis. “For now, I’m teaching his curriculum, but I’m pulling examples from my work experience rather than his teaching experience.”

Students who were in John Ellis’ class and who now have Jason Ellis as a professor gave some insight on some similarities and differences in their teaching styles and personalities.

“They’re both very committed to going around and helping us out individually,” said Kristin Lorentzen, a 20-year-old architect major. “It’s very easy to understand Jason’s points because he just came out of a firm and has very applicable experience as to what’s going on in architecture right now.”

Robert Hollis, a 23-year-old architecture major, delved into the differences that he likes about each one.

“John made things exciting through his story-telling, which I liked because it’s laid back and doesn’t stress you out about deadlines,” Hollis said. “But I really like how Jason gets straight to the point and he thinks like an architect. He brings tons of different architectural elements and ideas to the projects that I never would have thought of.”

David Devereaux, a 21-year-old architecture major, said he was very keen on the idea of having John Ellis’ son as a professor.

“The way that they talk and go about things, you can definitely tell that they are father and son,” Devereaux said. “I suppose it’s a very fitting thing to see the father retire and the son take his place for the job.”

Jason Ellis said that his main goal in his time at CRC is to get the word out on what an amazing architecture program the campus offers to inspiring architecture students.

I’ve worked with around 100 people that went through the CRC architecture program, some of them being presidents and principals in firms around Sacramento and beyond,” said Jason Ellis. “So, I look at this as continuing a legacy of a fabulous program that we have on this campus.”