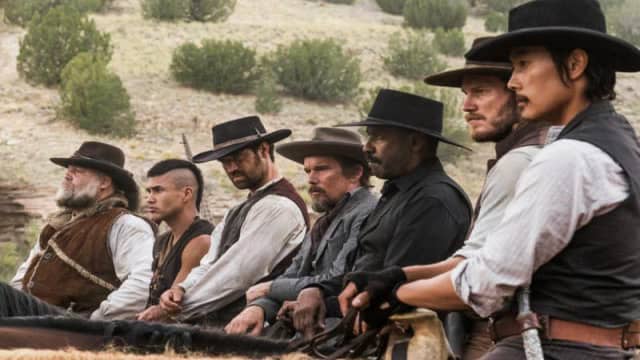 Set in the fictional Sacramento Valley town of Rose Creek in the 1870’s, an industrialist named Bartholomew Bogue (Peter Sarsgaard) has taken the gold-rich town from its townspeople, and is not above having his men murder people in the street to keep it. Two residents, Emma Cullen (Haley Bennett) and Teddy Q (Luke Grimes), hire bounty hunter Sam Chisolm (Denzel Washington) and enlist him to assemble a band of men from around Northern California to take their town back from Bogue and his army.

But a diverse cast is just part of what it takes to make a movie with a respectful and accurate representation of people of color. “Magnificent Seven” took that first step, but in the process highlights that a lack of diversity is a symptom of a much bigger racial problem in American media – ignorance.

The choice to include a Comanche warrior in Northern California, rather than a member of a local nation, is baffling, yet never properly addressed. And the film’s lasting message on race relations and internal discrimination should be questioned when Red Harvest kills the only other Native American character (also a hired gun, but for the “bad” side) while calling him a disgrace in what we’re supposed to assume is a shared language.

But where the writing was quick to identify Red Harvest as Comanche, there is a sudden lack of specifics for the character of Billy Rocks. There is an entire scene dedicated to talking about how and why the character of Robicheaux became partners with an East Asian trick shooter, but the entire conversation skirts around identifying exactly what ethnicity Billy is. Instead, the writers chose to have the characters refer to him several times as being from the “mystic Orient,” even while condemning such language.

Like most modern revisionist Westerns, the film’s true strength lies in its cinematography. There are plenty of crisp, highly contrasted colors and gorgeously-framed landscapes. These are only slightly blighted by several instances where Fuqua experiments with shot styles and focus in the first half of the movie.

The action of the opening sequence is filled with moments where the movement and sources of dialogue are held in the center of the frame, but kept out of focus, while holding the focus on empty spaces in the corner of the screen.

There is also a jarring moment when the character Faraday is introduced and we are suddenly thrust into a shaky, point-of-view shot from his perspective, which is held for a full minute before returning to normal.

Thankfully, Fuqua abandons these trials by the third act, and the strong mise-en-scène (the way that objects are placed in the frame to add to the story) carries viewers through the confusion.

But viewers from Northern California may have to suspend disbelief, as it appears that neither Fuqua nor his location scout have ever set foot in the Sacramento Valley. The sandstone canyons and rolling sand dunes makes one wonder why the story was not just set in New Mexico, where it was filmed.

“Magnificent Seven” is a well-made film that can stand on its own two feet. All of the actors deliver solid performances, and despite failures of writing and direction, it is full of action and interesting characterizations. There is no room in the two-hour run time for the viewer to lose interest.