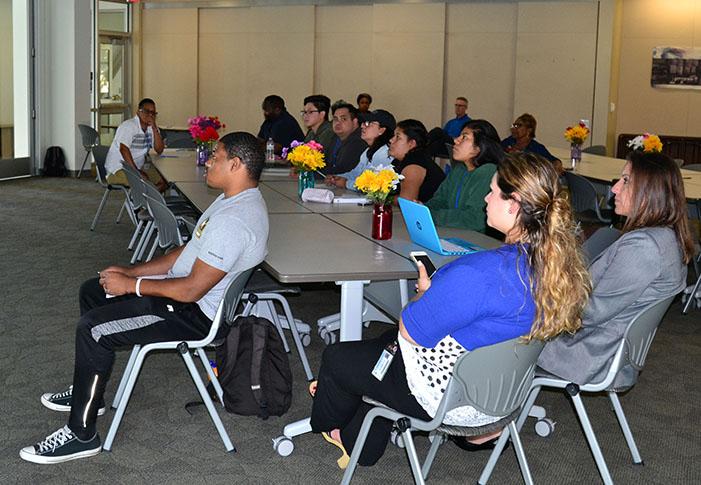 Mes de LatinX officially opened on Sept. 21 with a lecture from Olmeca in the Recital Hall. Olmeca is a hip hop artist and activist who has influenced a group of students from the Student Life and Leadership Center.

He gave a lecture in San Francisco at the NCore Conference. The NCore, National Conference of Race and Ethnicity, was what the lecture was about. Olmeca showed a slide show and a video called “Browning of America” to show what LatinX has done for the community and how they can influence authority.

“I feel the event is empowering,” Olmeca said. “The idea here is to nurture and provide more information to contextualize the topic that is on point here.”

The lecture was interactive, allowing students to say what they have been feeling and to express themselves about what LatinX means to them. Olmeca spoke about three main powers that LatinX influences, which are political, economic and cultural.

“We are at least 25 percent more Latino on this campus,” said Oscar Mendoza, a student success and support program specialist. “It merits the question, why have we not been more proactive in finding different ways to help the LatinX community on this campus?”

The term LatinX was aimed at moving past the masculine word “Latino” and gender-inclusive word “Latina.” The reason behind this is to include those who identify as trans, queer, agender, non-binary, gender nonconforming and gender fluid.

“Knowing that there are people out there that share the same feelings makes me feel more open,” said 21-year-old nursing major Rosa Vega. “There are other people that have gone through the same things that I have gone through.”

A workshop in the Winn Center followed the lecture to get participants more involved. During the workshop, Olmeca split students into groups and discussed the topics a bit more before they did activities.

Mes de LatinX will continue throughout Hispanic Heritage Month from Sept. 15 through Oct. 15. On Sept. 26 and 27 they will have showings of the film “Walkout” that provides more context on the contributions the LatinX community have made.

“We want the students to feel recognized, validated, respected and affirmed that they are on the campus for a reason,” Mendoza said.

For more information on LatinX and upcoming events you can go to their website www.crc.losrios.edu/mesdelatinx.