The Color Wild: A look into a Sacramento synth pop band 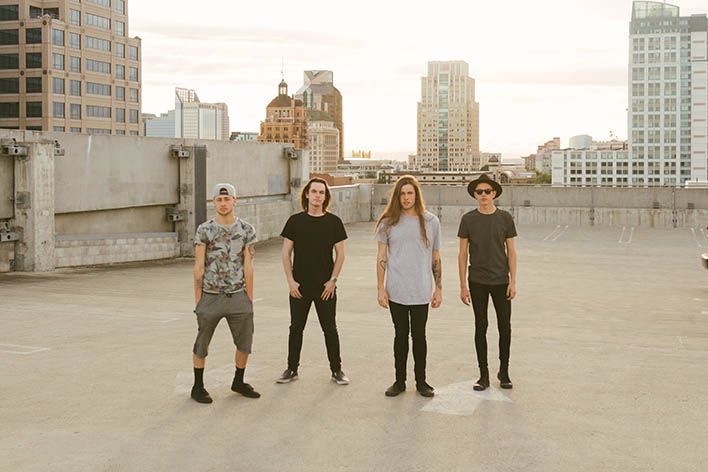 For an up and coming band, practice is extremely important, and watching local band The Color Wild not waste a second of their time together as they immediately migrate into a designated room of a family home, it is clear the band is focused and determined to achieve nothing less than greatness.

The band is composed of the three Crosson brothers, who were previously in a band called Cheating Daylight: Jesse, 22, plays keyboard and sings; Kyle, 20, takes the primary singing role; and Jaden, 17, plays drum, as well as the addition of friend Josh Hansen, 20, who plays guitar.

“We’ve been playing music since we were young,” said Jesse. “We just wanted to do something that was different from the music we were playing before and we wanted to make music that would make people feel good and dance so that’s why we started The Color Wild.”

Being a completely different project from the previous that started about a year and a half ago, The Color Wild has shaped the band to be what they envision it to be.

“When we started writing music it was a little bit more on the rock side of things,” said Jesse. “It’s shifted in terms of what we think is important as far as expressing ourselves through our music.”

The band describes themselves as “alternative synth pop,” Hansen states. The band gathers influence from a wide range of music they enjoy, including synth heavy or guitar driven music, 80’s pop, jazz and even classical.

“We just take it all and make something that people could enjoy and get down to,” said Jaden.

Although it is clear the band is the top priority, everyone has busy schedules to juggle, including having jobs and attending school.

“We’ve definitely got managing it down to a science,” said Hansen. Hansen is an engineering major, as well as a music major, who works on top of that.

Jesse is currently getting his master’s degree in voice at California State University, Sacramento. Kyle has a job working for a real estate company. Jaden is finishing up his senior year of high school and stays involved in student government, while having a job.

Although the workload for each individual member can be time-consuming, it doesn’t make a dent in how much effort they put into the band.

“It’s not too challenging to balance life with the band because we have such a strong support system making life 10 times easier for me and I’m sure the guys as well,” said Jaden.

The work ethic of the band has seen great payment. In September, the band joined the lineup in one of Sacramento’s newer festivals, City of Trees. The festival included high profile bands, such as Panic! at the Disco and Weezer.

“The experience was a blast,” said Kyle.“It was awesome playing with the bands we grew up listening to.”

With the help of Artery Foundation, the label to which they are signed to and manager Andrew Roesch, this opportunity of performing live has been one of many. Performing in front of an audience can seem anxiety-ridden to some, but The Color Wild speaks of it with ease.

The confidence the band has as a whole radiates when speaking to them. It is clear they truly love playing music and cherish every opportunity they get.

“If you are doing it for the first couple of times it is nerve-racking but besides that once you get past those nerves, you don’t want to waste too much time being nervous,” said Jaden. “You want to spend all your time performing, having a blast and enjoying giving people certain emotions that they can’t find anywhere else.”

Along with the opportunity of playing live, the band has had radio play in the Sacramento area.

It should be noted how well they work together and all have the same mindset to get things done. When it comes to writing the music, everyone in the band has input to help transform and mold it into the final outcome.

“We have written some pretty cool things that we never necessarily would have came up with a year and a half ago,” said Hansen.

The song that has been surfacing on the radio is called “Brighter Than The Moon” which also will be featured along with a handful of others on an EP that they plan to be released sometime in the next few months.

Kyle recommends first time listeners to listen to the song because “It kinda tells you what we sound like as a band in one song.”

On top of an EP release, the band is in the works of gathering ideas for a music video.

On Dec. 5, The Color Wild will be opening for Against the Current at The Boardwalk in Orangevale.

To listen to some of the band’s demos in preparation for their EP release, go to thecolorwild.com.