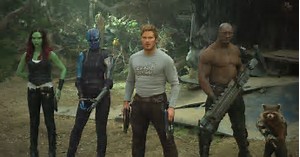 Adding yet another installment to the Marvel Cinematic Universe, Director James Gunn produces a fun, albeit slow-paced, sequel with “Guardians of the Galaxy: Vol. 2.”

The film picks up shortly after the original “Guardians of the Galaxy,” this time exploring the journey as Peter Quill (Chris Pratt) discovers his father, Ego (Kurt Russell). The sequel employs much of the antics and inappropriate comedy that made the first film so successful, but diverts from the formula occasionally to offer deeper character development. The sequel also takes a much darker turn than the original, with many depressing undertones woven throughout the film.

The visuals are once again stunning, with new planets appearing in all their computer-generated glory. Often, CG tends to be the enemy of a solid plot, but in this film, they coincide quite nicely. The visuals add so much to the film, and it would have likely suffered without them.

While the music sometimes feels too strong at certain points in the film, Composer Tyler Bates once again delivered a stunning score that can stand alone. The sequel also continues the trend of playing music from the 1970s and ‘80s, with songs that perfectly fit each particular scene.

The plot is fairly easy to follow, but has more than enough depth to keep the viewers interested. Though some of the dialogue is lacking, the main cast delivers solid performances from beginning to end.

On the downside, the plot does have issues. The film does not suffer from the common problem of having too little story to offer; rather, the film has so much to communicate, the plot feels extremely dense. While the action scenes are well-choreographed and are definitely up to par, they become fewer and farther between as the movie progresses.

To the movie’s credit, it’s difficult to properly develop so many characters in one film. With a minimum of seven characters all sharing screen time, the film does its best to equally develop each of them. It successfully accomplished this with a few characters, such as Quill and Drax (Dave Bautista); however, for nearly all the remaining characters in the film, their character development is spotty, forced and seems tacked on as an afterthought.

As hard as the movie tried to balance the character development with the action and overarching plot of the film, it simply didn’t work correctly. The movie sacrificed proper pacing for this unfinished balance, and it suffered somewhat for it.

Despite the issues with pacing and character development, the movie still shines. The dark undertones fit perfectly for this installment, but there is still plenty of hijinks and humor to keep up the good feelings. “Guardians of the Galaxy: Vol. 2” may have some glaring cons, but it had more than enough pros to make it worthwhile.