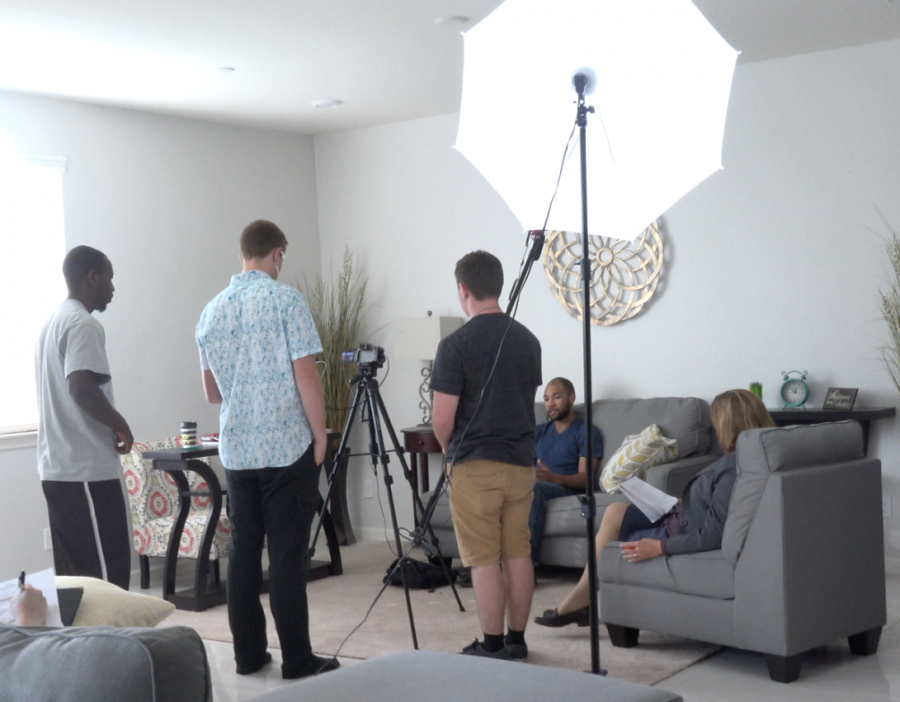 Jason Rhodes (pictured left) works with actor Marcellus DeLove (middle right) and cast on the production of his lm, “The Dance.”

The film, “The Dance,” is about a depressed man who meets a girl that is not what she seems. It was written and directed by Jason Rhodes, a student of Cosumnes River College at the time and he submitted it to multiple film festivals.

“It took me a while to really grasp the fact that it was selected,” Rhodes said. “It was really a surprise.”

Assistant director Emily Lotz shared her experience when she and the rest of the crew learned about getting picked.

“We were going nuts in our group chat, it was so exciting.” Lotz said.

The idea for “The Dance” was inspired from a poem made by a classmate of Rhodes, Francisco Luna. After receiving Luna’s permission, Rhodes wrote a script, but never finalized it until he had the opportunity to use it for Wagner’s class.

“I remember after he shared the poem, I felt it was well-written and I was still thinking about it afterwards,” Rhodes said. “That’s how good it was to me: it left an impression.”

Some filming of “The Dance” took place at CRC, but most of it took place off-campus. It required a lot of behind-the-scenes work in terms of permits, contracts with actors, notifications of filming, handling emergency situations and much more.

“I was in charge basically of the business side of things,” Lotz said. “So that when were filming, the focus is on the film, the actors, the director and nothing else.”

There were eight main students working on the film, their roles including cinematography, sound production, editing and costume designing. Each role was necessary in order to make the film.

Aaron Lake, who did sound production, worked alongside cinematographer Matthew Walter by holding the boom microphone and checking sound levels.

“People take that job for granted and not a lot are willing to do it,” Lake said. “I was assigned the job and it turned out being really important.”

In addition to sound, music can be very influential in a movie. Wagner suggested to use the resources available on campus, leading Rhodes to go to the music department and ask if there would be interest in having an original score for the film.

“Big credit toward Daniel Horne and Gabriel Lopez for composing the music,” Rhodes said. “Without it, I don’t think the movie would’ve had the same impact.”

But overall, the success of the film appears to come from the dedication and passion of the whole crew.

“All of us in the beginning had the mindset of ‘we’re going to put in as much work as possible to make this really great,’” Lotz said. “Many of us skipped our classes at certain points because the film was a first priority to us.”

Both film festivals that selected “The Dance” will recognize the winners with an award or a prize. But Rhodes was just happy to create the visual representation of the message behind the original poem.

“It’s not about winning but I mean if we did, great. But I’m thankful that they accepted it and are showcasing it so more people outside of the school can see it,” Rhodes said.

When asked about the possibility of working together again on another project, the interviewees all said they were looking forward to it.

The Sacramento International Film Festival will screen “The Dance” on April 28 at the Delta King Theater at 7 p.m.