‘Extinction’ is an expensive broken record 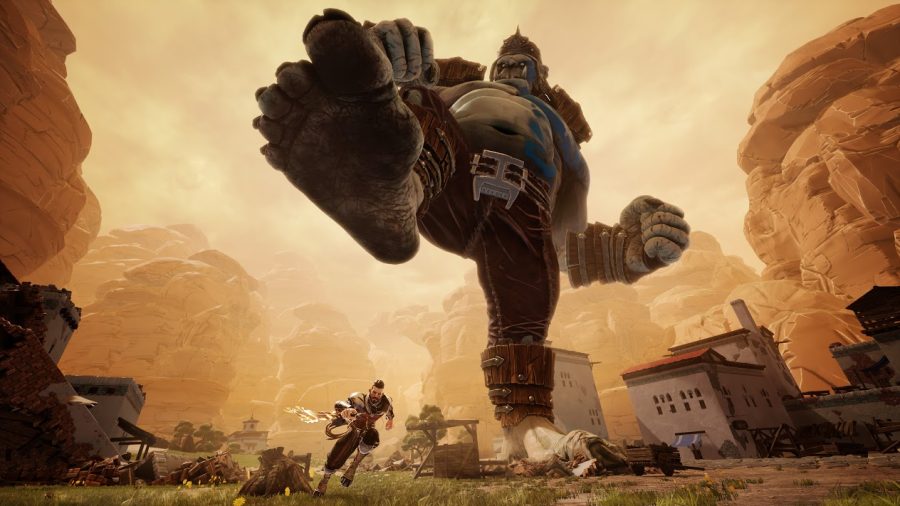 “Extinction” is a game that is very hard to recommend. Its repetitive nature and fundamental gameplay issues doesn’t warrant its hefty price tag.

The game is developed by Iron Galaxy Studios, which notable works are “Killer Instinct” (2013) and “Divekick.” It is set in a fantasy world where 150-foot-tall ogres called Raveniis destroy and kill everything on sight and it is up to the main character Avil and his friend Xandra to save as much as they can.

Don’t assume that “Extinction” is devoid of redeeming qualities. The developers created a beautiful setting for their game to take place in. The toon/cel-shaded character models and environment mimics its hand-drawn cut scenes. A good comparison of its graphical fidelity would be “Fortnite” or “Overwatch.” Hacking limbs off the gargantuan Raveniis were very satisfying and requires a strategic approach that is only topped by games like “Shadow of the Colossus” and the “Attack on Titan” series.

Unfortunately, this game has a ton of problems fundamentally, and it starts with its environment. Most of the time, the players will see the same type of level over and over. There aren’t a lot of variations throughout the settings of each level. Sometimes the levels would be randomly-generated, but that just solidifies how interchangeable the levels are.

Not only was the environment repetitive, but the gameplay shares the same symptoms as well. Throughout the majority of the game, the player will be tasked these objectives: save citizens, kill giant ogres, kill jackals or ogre underlings and prevent the destruction of watchtowers within a time limit. There are a few variations in gameplay but there aren’t enough of them, especially in the beginning. Even when the game presents the randomization element, it still didn’t change a whole lot to the game’s dynamics. Another problem would be the citizen’s lack of self-preservation. They just wait around until the player rescues them and don’t try to get themselves to safety.

Another major problem would be the game’s story. The majority of the narrative is told through cut scenes and exposition via dialogue box. Rarely do you see this game weave a story element into the gameplay itself. This defeats the focus of what modern games are trying to achieve and in turn, makes it feel out of date or even out of touch. Take the game “Kingdom Come: Deliverance,” for example. It is able to integrate the character’s background and use it as a gameplay element. In “Extinction,” the player doesn’t even see another character let alone story elements during gameplay. It feels like the developers felt obligated to tack on a story on a time-attack action game. The main character is quite bland and at one point, Avil even admits that his character is boring. This is not even mentioning her very annoying partner Xandra, who taunts Avil at every death.

The most exciting part of the game is fighting the giant ogres. The Ravenii would often time wear different armor which differs in durability and the way the player would approach each encounter. The Raveniis put the player’s skills and strategy to the test and it results in very engaging fights. However, the Ravenii aren’t the player’s main adversary in these situations: it is the game’s camera. Typically, when a player engages a large enemy like the Ravenii, the camera would zoom out to fit the action on the screen. In “Extinction,” the camera doesn’t do that, making it hard for the players to dodge even telegraphed attacks.

To put it lightly, this game is average. It isn’t the worst game of 2018, but it’s really hard seeing this game as the top of any gamer’s priority. This game’s repetitive nature and the lack of story will put off a lot of people in the gaming community. Perhaps leaderboard chasers would have a great deal of fun in this game, but other than that, it isn’t worth spending $60 of your hard-earned cash. Maybe wait for a huge discount for this one and don’t be surprised to see this game free with your Playstation Plus or Xbox Gold service anytime soon.