Professor outlines possibilities for other sources of energy 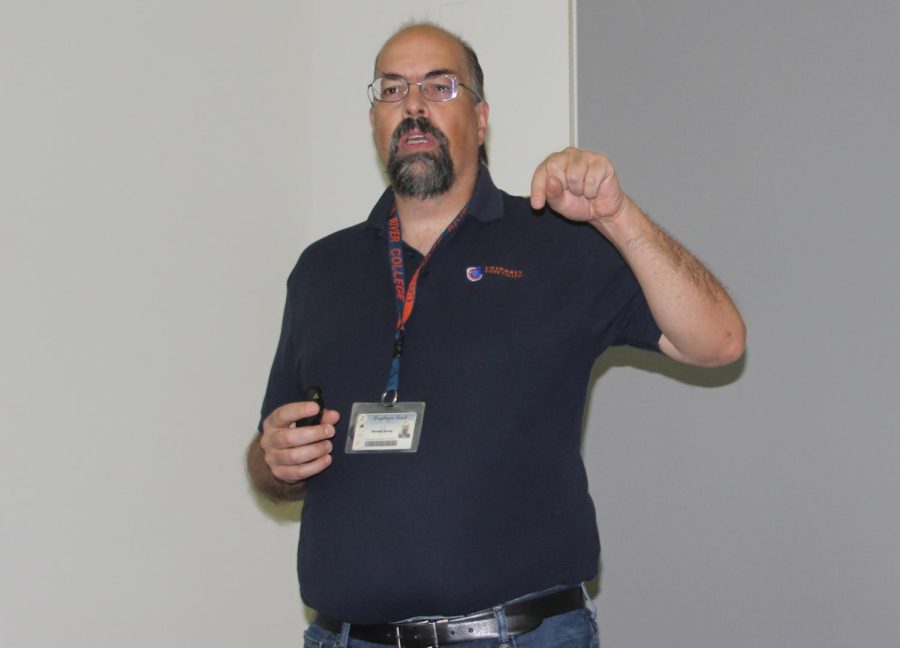 Physics and Astronomy Professor Michael Strong presented the “Energy for the United States: A Path to 2050” lecture on April 16 in WINN-150.

The event, attended by students and faculty, focused on identifying problematic sources of energy in the country and looking for better alternatives.

“We all live on the same earth,” Strong said. “We all need to be good caretakers.”

During his lecture, Strong said that the quantity of oil is becoming very limited.

“We have finite supply of hydrocarbons,” Strong said, further adding that there’s a 50-year supply of oil left. Even if the country stopped using oil as a major source of energy, he said that they’ll still be used for lubricants, pesticides, herbicides, and pharmaceuticals.

Strong discussed the problems of solar cells called photovoltaics being used as a main source of energy, saying that there would need to be 31 panels per household to supply everyone in the country.

Strong also said that photovoltaics have a lifetime of 20 years.

As a solution, Strong listed concentrated solar power as an alternate source of energy.

“We’ve been using concentrated solar since the 1970s,” Strong said, citing the heating of pools as one example that uses it.

Despite the potential, Strong said that this kind of technology needs to be improved.

Strong said nuclear energy is another alternative energy source, but is often misunderstood.

“Most of the reactors were designed in the 60s and are 70s technology,” Strong said.

Strong said that newer kinds of nuclear technology include the Liquid Fluoride Thorium Reactor, which is a molten salt reactor.

“Fluorides are very stable,” Strong said. “Thorium itself is one or two steps away from uranium.” Strong further said that it’s very hard to weaponize due to to its half-life.

“We need to be more educated about this,” Strong said.

During a Q&A, Psychology Professor James Frazee asked what the risk vs. rewards were regarding photovoltaics and nuclear energy.

Frazee also asked what the issues of investment were involving the two.

“It would actually cost a little bit less to build reactors,” Strong said, adding that it would save $12 trillion.

Waiman Sce, a 24-year-old communications major, said that the lecture was a good event.

“It’s interesting because I learned something new,” Sce said. She also said that the concepts of solar panels and photovoltaics were interesting, as well.

However, Sce said that she wanted to see possible arguments to the solutions that were listed during the lecture.

“I want to hear the challenge to the solutions,” Sce said.