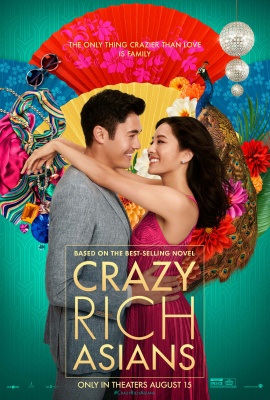 The glimmering sets of “Great Gatsby” meets the humor from “The Proposal” in one of the most highly anticipated films of the summer. “Crazy Rich Asians,” which premiered in theaters on Aug. 15, has set an incredible milestone for Asian Americans in the entertainment industry.

The $30 million-budget movie follows Economics Professor Rachel Chu (Constance Wu) and her boyfriend Nick Young (Henry Goulding) on their trip to Singapore to attend his best friend’s wedding. The film boasts quite the ensemble, enlisting actors like “Ocean’s 8” actress Awkwafina and Michelle Yeoh, an award-winning actress best known for her role in “Crouching Tiger, Hidden Dragon.”

With the cast as diverse as it is, it was no surprise to see how “Step Up: All In” Director Jon M. Chu oversaw the combination of East and West in the film. Throughout the movie there were clear references to both, with scenes definitely meaningful to audiences who understand the meaning behind them.

Because of this, however, the movie has very little to show for it in regards to Asian culture. Like the Young family’s reluctance to latch onto Chu’s inner Asian-American spirit when they first meet her, the movie doesn’t quite seem to grasp to anything remotely related to Singapore–besides the fact that some Chinese-Singaporeans are crazy rich, of course.

While Chu is constantly reminded of how American she is during their stay, from her boyfriend’s mother always on her back about Chinese traditions and sacrificing passion to everyone in their family’s clique mocking Chu for her nonexistent ties to a rich Asian lineage, Young is the one who eventually gets the ultimatum. He faces the biggest and possibly most dramatic conflict in the movie: whether he wants to be a family’s man and stay in Singapore or go back to New York with Chu and continue living the life they had.

The images Americans have of Asia never failed to escape the big screen as well, with jokes about plastic surgery and an unsuccessful one-liner about Korean pop stars. Seeing these images project into the movie eventually became tiresome to watch, but the finger-curling, cavity-inducing chemistry between Chu and Young seamlessly overshadowed them.

To add to the disappointment, though, the lack of other ethnic groups in “Crazy Rich Asians”  was severely off-putting, especially considering the fact that the film is set in a country where Indians in particular make up a good part of the population and some percentage of Singapore’s richest.

What was a good opportunity to destroy the monolithic myth of Asian countries was lost in an attempt to mass produce Asian culture to Western audiences. And while the movie packs in every Asian soap opera cliché they could in two hours, it ultimately fails to see Singapore and Asian culture beyond the American eye.

At most, the film is a product of what Hollywood does best: choosing colorism and favoring the narratives of people of color with lighter skin. If that was their goal all along, Hollywood has boxed in a movie worth more than $34 million, which will be honored for kickstarting the revolution to bring Asian Americans center stage with everyone else in the entertainment industry.

“Crazy Rich Asians” is not an entire celebration of Asian culture, but despite all the criticism, the party is just as good as the next. With Jon M. Chu revealing his plans on Wednesday to direct the sequel, Asians all over the world will be popping bottles of champagne for a long, long time.