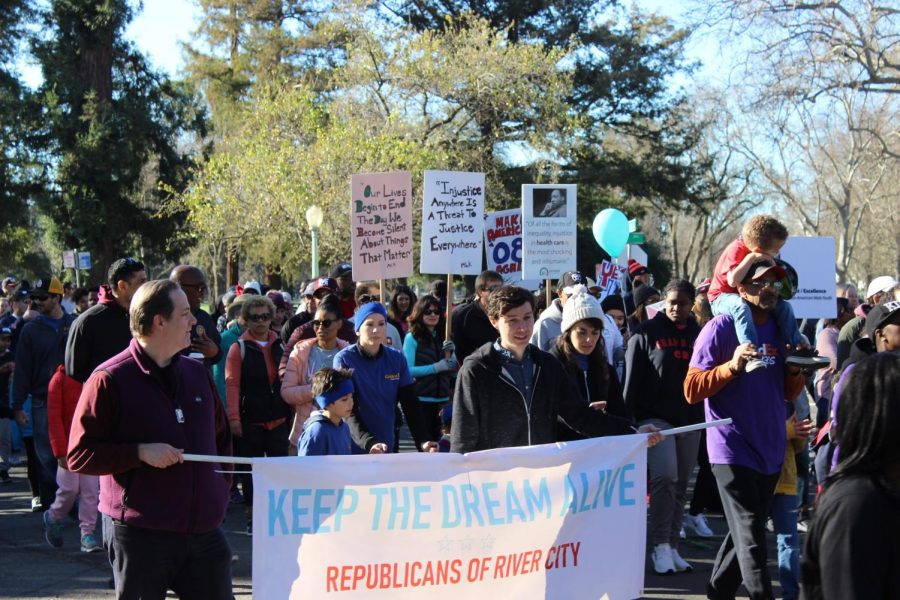 Thousands gathered at Sacramento City College on Monday and participated in the thirty- eighth year of the Martin Luther King Jr. march.

Every year, the theme of the MLK March is about honoring the past. The theme of Monday’s march was about impacting today’s future.

Steinberg introduced and acknowledged several assemblymen and local activists who continue to make positive strides in the community, sharing his commitment to the youth in Sacramento.

“We march to commit ourselves to say that as we create all these cool new jobs in the new Sacramento, it’s our young people from our neighborhoods who are first in line for those jobs,” Steinberg continued. “We march for justice, for opportunity, to translate Dr. King’s ideals, which will never die, into real action.”

Steinberg told the crowd that in the 38 years of the MLK March, he has only missed two because of the inaugurations of Barack Obama and from being sick.

Gerri Higgs, one of the people in the crowd who said they have participated in the march for the past 10 years, said that they come because they still believe in Dr. King’s dream.

“Change happens every single day because of his dream,” said Joseph Jones, a retired bus driver. “You’d be a fool to think that because we don’t always hear about it or it’s not blasted all over the media that change hasn’t happened.”

Sacramento MLK365 Executive Director Sam Starks also believes that one man’s dream for equality and justice everywhere for everyone has progressed over time.

Starks stressed to the crowd that the people have made movement and people have died, adding that he honors their legacy of sacrifice.

While the majority of the three-mile march was peaceful, with hundreds of people singing and cheering the whole way, the mood slightly changed at the tail end as the crowd approached the Sacramento Convention Center.

Sacramento’s Black Lives Matter protestors were passing through in their own march just as MLK365 was coming to an end.

“We might dance differently but we’ve got the same song and that song is love and justice and freedom for everybody,” Starks said.

State Worker Roane Thu, one of the marchers who shared the same look of mixed emotions about the BLM protestors separating themselves expressed that they’re “all here for justice, for everyone.”

“Standing together makes us stronger,” said Thu. “Standing apart creates a false illusion of everything Dr. King stood for.”