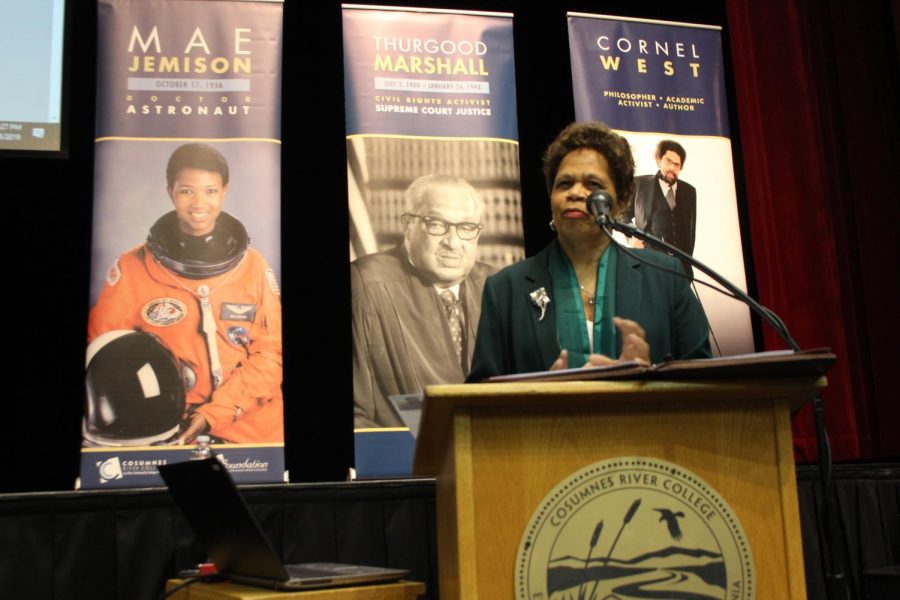 Dr. Melvina Jones presents her family's story of migration during the opening ceremony of Black History Month on Feb. 6.

A former professor shared her family history and immigration story on Feb. 6 in the Recital Hall in honor of Black History Month.

Former Cosumnes River College Professor Dr. Melvina Frances Jones was the first of many speakers to speak during the opening ceremony.

The theme for this year’s Black History Month is “Black Migration.” Many students and faculty gathered to listen about Dr. Melvina Jones’ family history of immigration from North Carolina.

“Migration is timeliness and it’s universal, it is not a black thing,” said Jones. “Unless you are 100 percent Native American, your kind came from somewhere. We are a nation of immigrants.”

The ceremony started off with opening remarks from Counselor Dr. Teresa W. Aldredge and College President Edward Bush. Lenora Callins, an Umoja Diop student, read her poem “This is the Great Migration” to the audience.

Jones introduced History Professor Alexander Peshkoff. Peshkoff was a former student of Jones’s and introduced the topic of “The Great Narrative of History.” Peshkoff’s history class was in the audience listening to Jones’ speech.

Jones came to CRC in 1989 as the Dean of Humanities and Social Sciences. After three years, she decided to return to her passion of helping educate student by finishing her career.

During her speech, Jones promoted and gave the audience a brief background of her family history that is written in her new book. The book is related to this year’s theme of “Black Migrations.”

“My dad was nothing short than amazing,” Jones said.

Jones goes into more detail about her father’s migration story. She explains the terrible conditions of his migration and how hard mentally and physically it was to complete the migration.

Jones will publish her book about the historical contributions of her dad’s family, titled “Roxboro Roots: North Carolina Families Leave Their Imprints on America’s Story.” The book will be published by Waldorf Publishing and is scheduled to be released in July.