Former student talks about academic career and his own written works 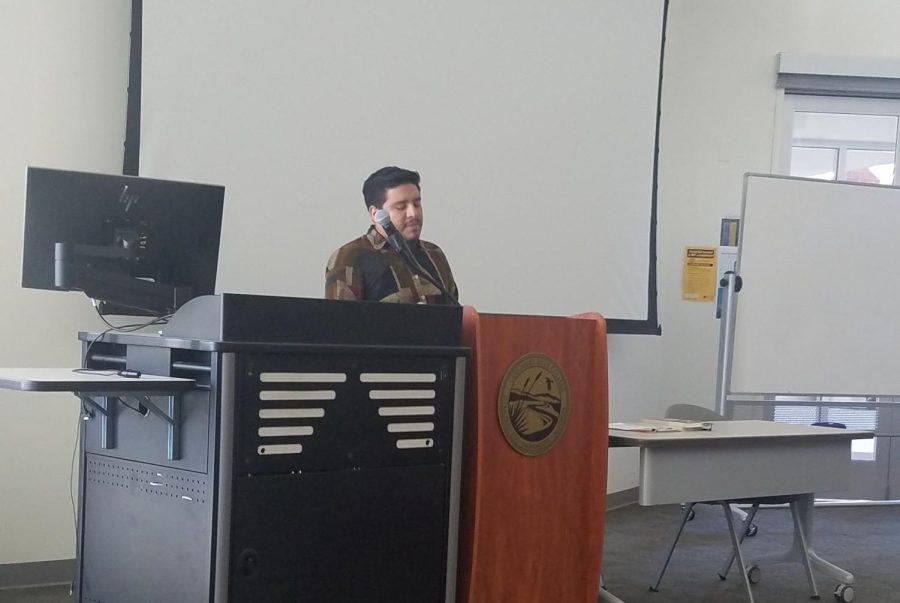 Oswaldo Vargas talks about his college career as well as his works as a poet. The event, which was on Tuesday, was the first event for Mes de Latinx, also known as Hispanic Heritage Month.

A Cosumnes River College alumnus spoke about his college experiences to kick-off Mes de Latinx in Winn 150 on Tuesday.

Author and poet Oswaldo Vargas spoke about his time at CRC, as well as his time at UC Davis and his work after college. Roughly 50 students attended the event.

“I was interested in Latin American history and poetry in general,” said Cameron Chistianson, a 19-year-old history major. “It’s not something I’ve really engaged with before.”

The event was opened by History Professor Alex Peshkoff. He said that calling Hispanic Heritage Month Mes de Latinx was “meant to be more inclusive.”

Vargas began his speech by recounting his experience at the “Farmers and Literature” panel at the 2019 Association of Writers and Writing Programs. He said he met “Butterfly Boy” author Rigoberto González, who he said was an inspiration to him.

“That was when I knew I was where I needed to be,” said Vargas. “Before that, I had been dealing with imposter syndrome, not feeling like I belonged there.”

Vargas went on to speak about his time at CRC, which he attended from 2011 to 2015. He mentioned that, during that time, he worked fields on a farm alongside his father.

Vargas said he wrote his first poem for publication, titled “Follow Me Down, Down, Down, Your Skin so Brown,” during his time at UC Davis, where he graduated. He recited the poem for the audience.

“And so he smudged to Raizez, and how I must be in Michoacán, in head and heart because as I and my branches grow, so do the roots that anchor me to the earth,” Vargas recited.

Vargas explained how he was encouraged by one of his professors at UC Davis to turn the poem in for publication.

“It was really cool to hear his work,” said 23-year-old history major Rachel Simi. “Especially from someone who was a former CRC student.”

Vargas read more of his work, including excerpts from the poems “How to Tell a Border Story.” He said the poem was inspired by the current border situation.

“I want to live long enough to see the 1-year-old in immigration court write a poem,” Vargas recited.

After this, Peshkoff stepped up to close the event, going over the importance of Mes de Latinx.

“The key reason, the most important reason, you’re here in college is to know something about yourself, and to empower yourself with the history you’ll learn here,” Peshkoff said.