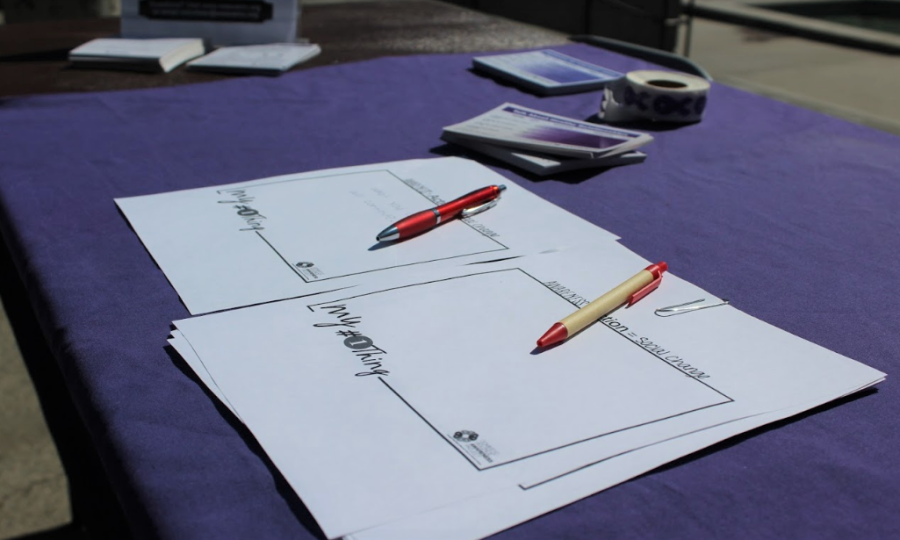 WEAVE Confidential Advocate Emily Zavala-Aguilar said worksheeets titled “My #1 Thing” were offered to students where they could fill in one thing they would do to stop domestic violence from occuring in their community. The event, which took place on Thursday, was held in honor of Domestic Violence Awareness Month.

A WEAVE Purple Ribbon Event for Domestic Violence Awareness Month took place on Thursday in the quad from 12 to 2:00 p.m.

Emily Zavala-Aguilar, the Los Rios WEAVE Confidential Advocate and coordinator of the event, said that while she has been working on the campus for a year, the WEAVE event has occurred on campus for three years.

“This event includes dual roles for sources on prevention and education events,” said Zavala-Aguilar. “We deal with students one-on-one and we are another option for them instead of them having to report incidents of violence to the school.”

Zavala-Aguilar said there’s more than one type of domestic violence. She explained that one in three women and one in four men will experience domestic violence, so it is important that the community continues to talk about it.

“It’s important that we keep the conversation going,” said Zavala-Aguilar. “A lot of people don’t realize that domestic violence can be more than just physical violence.”

Zavala-Aguilar said that she is the only WEAVE Advocate on campus since it is a non-profit organization. She mentioned there is no funding to have multiple advocates on campus.

Students like 19-year-old Medline Velasquez and 20-year-old Katherine Mendoza said the event was necessary to have on campus.

“It opens the door to continue the conversation,” said Velazquez. “With relationships, sometimes you focus on the positive and ignore the negative. Talking about it really opens your eyes.”

Mendoza said that faculty should become more aware in regard to any signs of domestic violence among their students.

“I haven’t heard about the confidential advocate until now and I didn’t know who the coordinator was,” said Mendoza. “The campus should be making it more well-known.”

Faculty Coordinator Carol Bernardo and Internship Developer Eline Williams both approached the table for the event.

Bernardo and Williams both said they think it is very important for students to have information regarding WEAVE.

“We work with WEAVE for those who are seeking internship opportunities,” said Bernardo. “We’re delighted to have them on campus.”

Zavala-Aguilar said the planned results of the WEAVE Purple Ribbon event was to provide a lot of positive feedback to students in order to prevent domestic violence in the community.