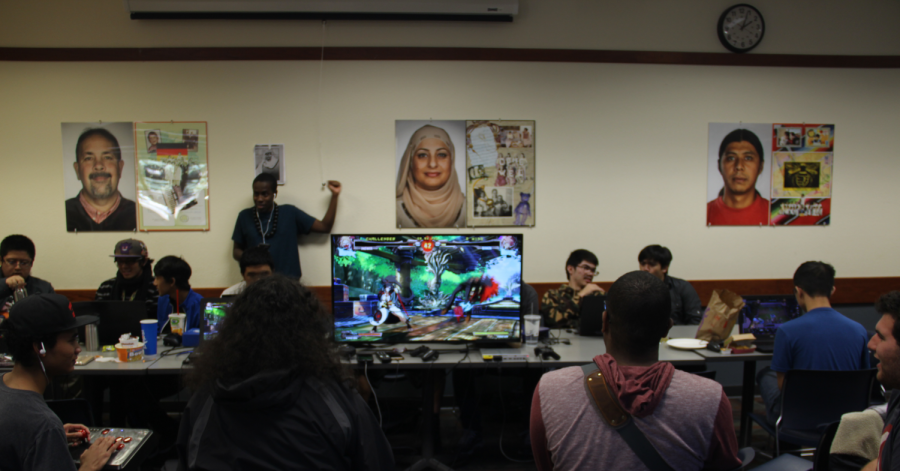 Students like to play fighting games such as “Guilty Gear Xrd” on a computer monitor in the cafeteria. The games played at the table range from new releases to more retro titles.

The cafeteria offers a lot for students, be it an early morning cup of coffee or a quick lunch in between classes. One thing some may have noticed is the group of students at the back of the cafeteria playing video games on setups of various sizes.

Leanardo Ramirez, a 20-year-old fine arts and animation major, said the group is unofficial since it’s not a formal club.

“There isn’t really any set organization,” said Ramirez. “More of a type of controlled chaos.”

Ramirez said he started playing with the group during October of last year. Though he said he didn’t really know anyone else there at the time, he became friends with several of the other players after a few months.

“People come and go, play games they like and talk with each other,” said 20-year-old computer animation major Pavinesh Singh. “It’s a place for people to get together when they’re not in class.”

Ramirez said the group started around three years ago, starting small and growing over time. He said one person brought their gear, and from there more and more people started to show up before it became a regular thing.

The area usually operates on a first-come, first-served basis, Ramirez saying anyone is welcome to join.  He said there were no set rules for the games to be played, and the only requirement of the people participating is to get along.

Ramirez said that people at the table usually play competitive games. The most common of these are one-on-one fighting games like “BlazBlue” and “Guilty Gear,”  both from Japanese developer Arcs System Works.

“If a big new release comes out we may play that too, like the last ‘Mortal Kombat’ game or the next ‘Guilty Gear’ when it comes out,” said Ramirez.

Singh said some students will also play games on older consoles like the Nintendo Entertainment System, Super Nintendo or Playstation 2.

“We all have our own tastes,” said Singh. “Some people like to play fighting games while others enjoy more retro games.”

Yuli Espinoza, a 20-year-old sociology major, said she personally doesn’t mind the group of students being in the cafeteria.

“As long as they aren’t being disruptive, I don’t feel they are doing anything wrong,” Espinoza said.

Elisa Wilson, an 18-year-old undeclared major,  said it could be a good way for some people to socialize.

“It’s nice that people have that,” said Wilson. “It sounds like a good way to meet new people.”

Ramirez and Singh both said they felt the group had a sense of community to it.

“We all just came by one day and asked if we could play, and now a lot of us are friends,” said Singh. “We are kind of united by gaming.”