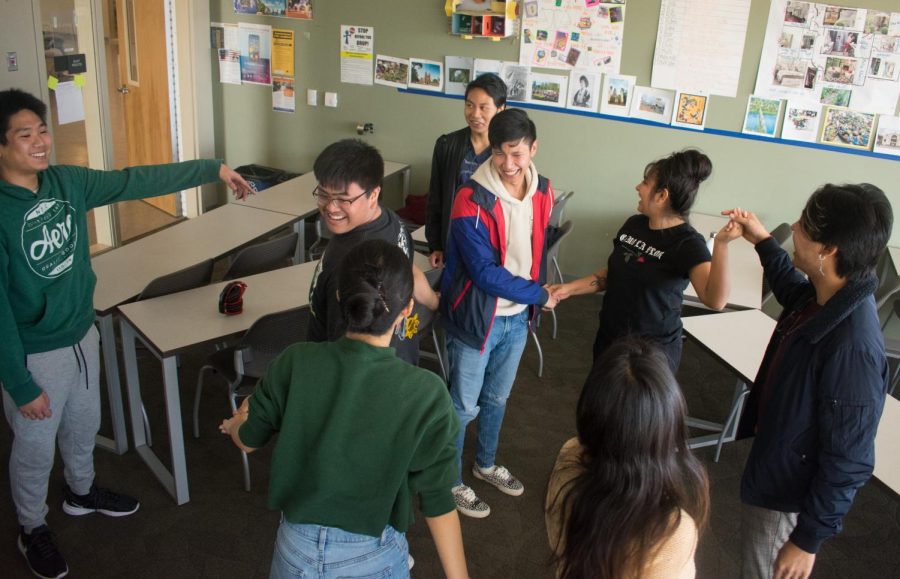 The Filipino Club engages with one another during a meeting held in Winn-225. The club aims to uplift Filipino students on campus as well as educate others on Filipino culture.

This semester, the Filipino Club made its debut as one of the newest clubs on campus, where students can learn more about Filipino heritage and culture.

The Filipino Club’s official constitution, which was written by 19-year-old Club President Isabel Angeles, states that the club aims to “encourage cultural awareness and excellence through various social and educational activities.”

“This is a club where you can make lifelong connections with each other and the Filipino community as well,” said Angeles. “Everyone in the club is a ‘kasama,’ a Tagalog word usually meaning ‘together.’”

Angeles said the club defines “kasama” as a “companion, comrade or partner.” She said the purpose of having a “kasama” in the group is to give club members a strong sense of togetherness.
Angeles said she has many responsibilities that she must fulfill to make sure the club is as strong as it can be. One of her first tasks is appointing board members and the official spokesperson for the club.

Angeles said the club will have activities, games and presentations in the future. While being in the club, students can expect to watch videos and movies, go on field trips, engage with guest speakers and do fundraising for the club. The Filpino Club will also collaborate with other Filipino organizations in the area.

Angeles said that the club wants to be active for people in the Filipino community but is for everyone, not just students with Filipino heritage.

Club Faculty Advisor Paolo Soriano said his goal is to offer support and provide ideas and suggestions to promote the club with.

“My job is to work with the club members to make sure the club stays engaged and meaningful as it pertains to their goal,” said Soriano.

While enjoying her position as the Filipino Club Representative, 22-year-old  Dana Mendoza said that it is her job to try and get students to join the club.

“The Filipino Club is actually to enlighten and cultivate everyone around us,” said Mendoza.

Mendoza said the club will educate people who don’t know about Filipino culture and traditions or anything about the Philippines in general.

Mendoza said the Philippines is almost a hidden country, so it is nice for students to join, allowing more people to learn about the history and the people of the country.

The Filipino Club meets every Friday from 11 a.m. to 12 p.m. in Winn-225. During the meetings, the club discusses traditions, Filipino holidays and many other activities and discussions that are related to the Philippines and Filipino culture.

For those who want to join, Angles can be reached at her email [email protected]