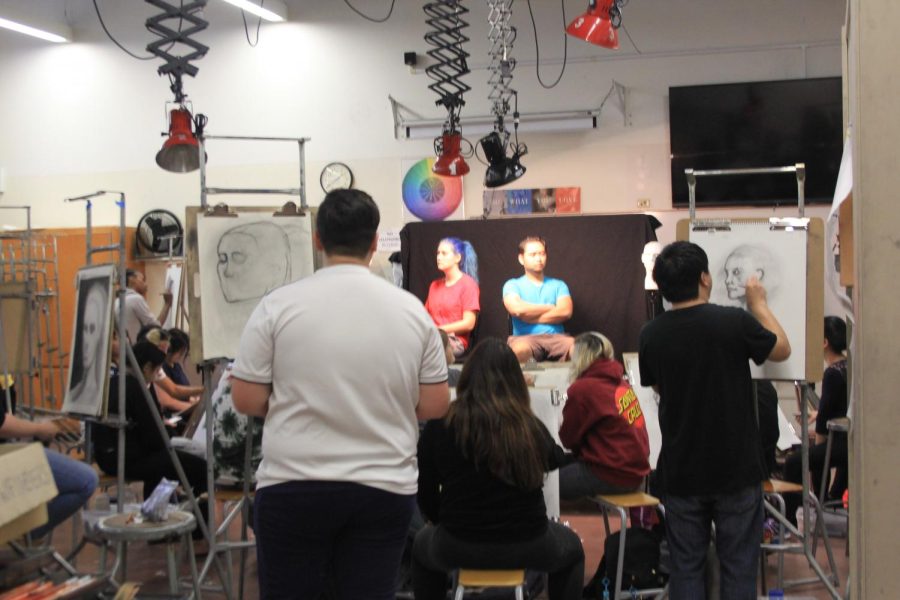 The beginning figure drawing class surrounds two models to sketch portraits of them from all angles. The class emphasizes the use of physical anatomy to draw.

The figure drawing course on campus are classes that focus on anatomy, proportion and the relationship the human figure has to space and composition.

Taught by Department Chair and Professor Jeffrey Kimbler, these classes can be taken either at a beginning or intermediate level and are attended by students living as far as Modesto.

“I think anyone can take the class no matter how bad they draw,” said Ashlyn Lewis, a 19-year-old costume design major who is taking the beginning class. “As long as you pay attention, take it to heart and try your hardest, it’ll look pretty good.”

The prerequisite for the beginning figure drawing class is Drawing I, which is taught by Kimbler as well as several other art professors.

Although Kimbler recommends taking this course, if a student feels like they have the skills to bypass this prerequisite, the student can present a portfolio or a really strong sketchbook to the instructor. Kimbler said he previously had students show him an online portfolio, but they still have to demonstrate some competence in drawing.

Oceanna Lewis, a 22-year-old undeclared major, said she is from Rio Vista and commutes about an hour to attend the Intermediate Figure Drawing class. Lewis said she prefers the art classes on campus as opposed to American River College or Folsom Lake because of the teachers.

“I love Kimbler’s classes,” said Lewis. “His way of teaching is easy to understand.”

.Kimbler said the way he prefers to teach is with a strong focus on anatomy because only then can students really process and understand exactly what they are seeing.

“People kinda look down on art as a whole, but classes like this teaches you really basic things,” said Steel Bungato, a 21-year-old studio art major who is taking the beginning class.

Bungato said the class gives artists a general basis on drawing anything that looks humanoid and with that skill, the artist can make their drawing look hyperrealistic or cartoony.

Kimbler said his students have spent the beginning of the semester constantly drawing different poses and learning the fundamentals. He emphasized that they are not copying, they’re processing and thinking very critically.

Kimbler also stated that some of his students have gone on to study at the California Institute of the Arts in Valencia, which is known for animation. He said a lot of big industries like Pixar hire out of there.

Ultimately, Kimbler said that drawing the human body is the greatest embodiment of art one can create.

“Studying the human figure goes back hundreds of years and depicting the human form in art has always been the highest form an artist can accomplish,” said Kimbler.