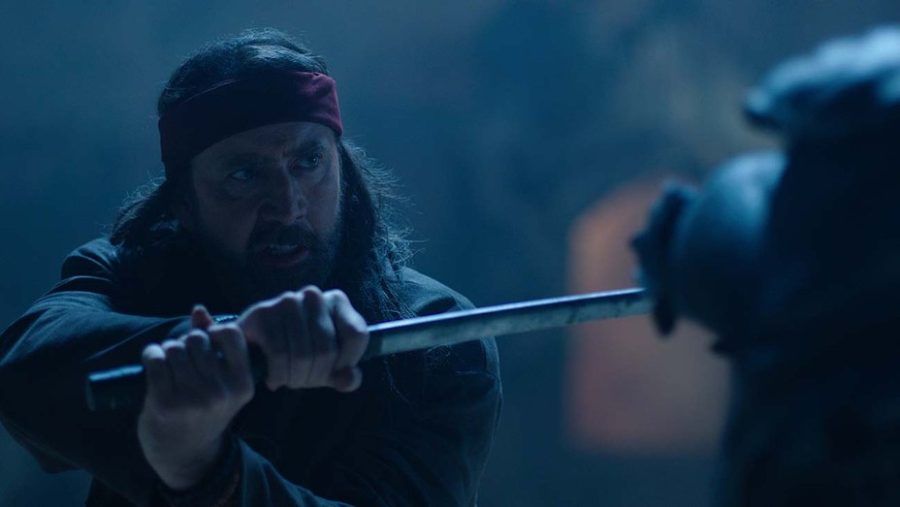 The martial arts movie "Jiu Jitsu" debuted on Nov. 20. The film stars Nick Cage doing what he does best, being a crazy person.

Over the holidays people will be trying to find a lot of ways to spend their time, with some spending it with their loved ones, while others try and get some extra hours in at work. I spent this precious free time watching a really, really bad movie.
Released on Friday, “Jiu Jitsu” is a martial arts movie based on a comic of the same name written by Jim McGrath and Dimitri Logothetis (“Kickboxer: Vengeance”), the latter of whom directed and co-wrote the screenplay for the film.
The best way I can describe this movie is if someone watched “Predator” and “Highlander: Endgame,” (sorry if you know what that is), and decided to mix them together. Except in this case, stupid.
The story’s premise is that once every six years, an alien named Brax (Ryan Terran, “Thor: Ragnarok”) comes to earth after a comet passes over the planet. When he does, he fights nine people in one-on-one deathmatches or he’ll throw a temper tantrum and blow up villages.
On paper, it’s a fine enough concept for a martial arts movie, simple and a good setup for a lot of action. In actual practice, it’s a poorly put together mess you can’t even find the energy to laugh at.
The movie’s main character (Alain Moussi, “Kickboxer: Vengeance”), and I use the second part of that title loosely, starts the movie bashing their head against a rock and losing all their memories. He then proceeds to spend the next hour saying some variation of “I don’t remember,” or, “what does that mean?”
To make it worse, characters ask him a question, find out he has amnesia, and then proceed to keep asking him questions they know he can’t answer. After about the third time someone said “YOU DON’T REMEMBER!?” I was already cheering on the alien.
The screenplay clearly needed someone to take a second look at it, as you’ll find dialogue contradicting what’s actually happening in the movie, scenes seem to have been put together in the wrong order and poor use of characters.
A particular example of this is with the character of the Military Intelligence Officer, (Marie Avgeropoulos, “Tracers”) who is featured in the first act of the movie. They seem to have her play the role of the normal person along for the ride of crazy nonsense, but she is killed off so unceremoniously that it wasn’t until the movie was almost over I realized she was dead.
The movie is also hurt by some really bad acting as well. There really isn’t much in the way of dialogue in the film, which for an action movie isn’t necessarily bad, but when a character needs to speak more than five words at a time it’s not great.
The people most guilty of this are Avgeropoulos and Moussi. Avgeropoulos doesn’t fit the role of a hard nosed military officer they tried to give her, with the scenes of her trying to interrogate the main character being laughable at best.
As far as Moussi goes, you could have replaced him with a can of tuna with a blackbelt and you would have gotten about as lively of a performance.
Nicholas Cage (“National Treasure”) is a crazy old man who lives in a hole filled with esoteric decor, and he’s also in this movie. He turns up the crazy dial to 11, giving what is probably the most entertaining line of the movie, “My hobby is making hats out of newspaper.”
Being a martial arts movie, the film could be forgiven for not being the second coming of “The Godfather” when it comes to performances, but in terms of its actual action it doesn’t do a great job either.
The film’s action is helped a bit by Moussi and other actors’ real life background in martial arts, but not enough to significantly improve them. One of the strangest decisions was not having anyone actually use any jiu-jitsu, despite it literally being the name of the film.
While it certainly doesn’t have the worst fight choreography in the history of cinema, it lacks creativity. The best it gets is during an early scene where the film tries a first person perspective, but the choreography they use doesn’t lend itself very well to the perspective.
Outside of that, there’s just a lot of basic, overly flippy fights out in the forest. Of the nine people the villain is supposed to fight, about three of them get more than 40 seconds of a fight scene before getting killed.
Tony Jaa (“Furious 7”) is criminally underused in terms of the film’s action. He only gets two fight scenes in the entire movie, and while these are the highlights of this aspect of the film, they also show how lackluster the rest of it is.
The movie also has some noticeable issues in audio and visual editing. The former is guilty of inconsistency when it comes to the fighting sound effects, switching from very standard sounds to overly quiet ones that take the impact out of hits.
In terms of visuals, there’s some decisions that should not have been made, the most notable being the overuse of slow motion for fight scenes. Nearly every other strike uses the effect in the early portions of the film, hurting the pacing of the scenes.
Camera work in the film also leaves something to be desired when it comes to quality . Some angles let you see the person NOT hitting someone else, which probably should have been reshot. There’s also a particular scene where it looks like they used a Go-Pro to film, and it’s hilariously bad.
“Jiu Jitsu” is just an overall bad movie, with it’s only redeeming quality being that it may make a funny episode of RiffTrax in the future. Its acting is bad even by the standards of cheesy martial arts films, and it doesn’t even have the decency to have awesome fight scenes to make up for it.