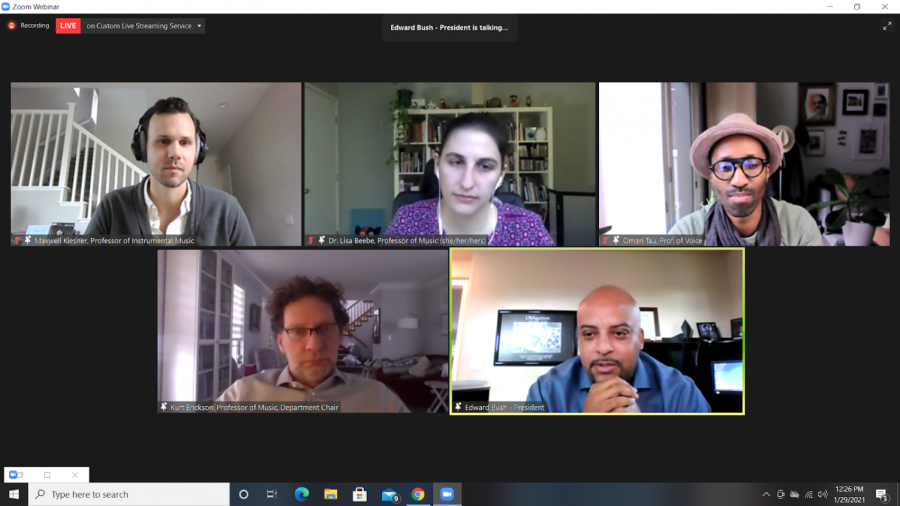 President Bush discussing his music with the professors of the music department. Bush described how his life has shaped his music taste.

The “CRC Music: In the Studio” series returned this semester and kicked off with President of CRC Ed Bush on Friday, showing participants his presidential playlist and his love for music.
The total playlist consisted of seven songs. The event started off with “Who We Be” by DMX, followed by “Fight the Power” by Public Enemy, “Redemption Song” by Bob Marley, “A Change is Gonna Come” by Sam Cooke, “For Every Mountain” by Kurt Carr, “Nothing Has Ever Felt Like This” by Rachelle Ferrell and capped off with “DNA.” by Kendrick Lamar.
“I was born and raised in Pomona, which is around 30 miles east of Los Angeles, and was raised in the church, and I think you will hear some of that influence in my playlist,” Bush said. “‘80s and ‘90s were my time at the start of hip-hop, so I’m definitely a hip-hop baby, so to speak.”
Well known for being in the soundtrack of the movie, “Creed 2,” Bush said he chose “Who We Be” to start his playlist because it gets people to not only reflect on how they feel, but also allows people to get into a type of feeling.
“Every hero needs a theme song, right? And I think in many ways, all of us are heroes,” Bush said. “When I hear that DMX song is when I want to get in that mode.”
Bush said he chose the following song “Fight the Power,” because it still resonates and sends a message to our society today.
“Many of the social issues that Public Enemy was speaking to in the late ‘80s and early ‘90s was about police abuse, economic and social injustice and we see even now that’s the thing we are grappling with,” Bush said. “To me, the music is timely and is still speaking against the social conditions that existed 30 years ago.
In the middle of Bush’s playlist, there was a transition from hip-hop music to gospel music (“For Every Mountain”), where the message shifted from creating positive energy to solidifying one’s identity.
“What has been encapsulated is this idea of a calling that your work and who you are is driven by a purpose and a call,” said Bush. “I think what you captured is really reflective of my calling and my purpose.”
Throughout the event, the playlist created a variety of thoughts and feelings; this allowed the panelists and attendees to learn more about Bush’s taste in music, his views on social barriers and his sense of humility.
“I just feel that in the choices you have, there is this arc that takes us from your superhero theme song and then you took us to a place where we discussed our plans to ‘Fight the Power’ and to reflect on what we were struggling with,” panelist member and Music Professor Omari Tau said. “Then giving praise and noticing that we are actually accomplishing our goals.”
Associate Vice President of Instruction for Economic and Workforce Development Kimberley Harrell was an attendee of the event and said she specifically chose to go because she is a huge fan of Bush and appreciates how the music department has been trying to provide an opportunity for meaningful connections with people during this remote time.
“I’m just so proud of the music faculty for what they’re doing to try and reach out to students and make music really relevant in people’s lives,” Harrell said. “There’s so much going on in society right now that music can really tell a story in parallel to what’s happening in the world.”
The next “In the Studio” event is “Raise Your Voice,” where an open mic is given to the CRC community to share their talents. If interested in participating or attending this Friday, visit here.

Spotify listeners can listen to the President’s playlist below.