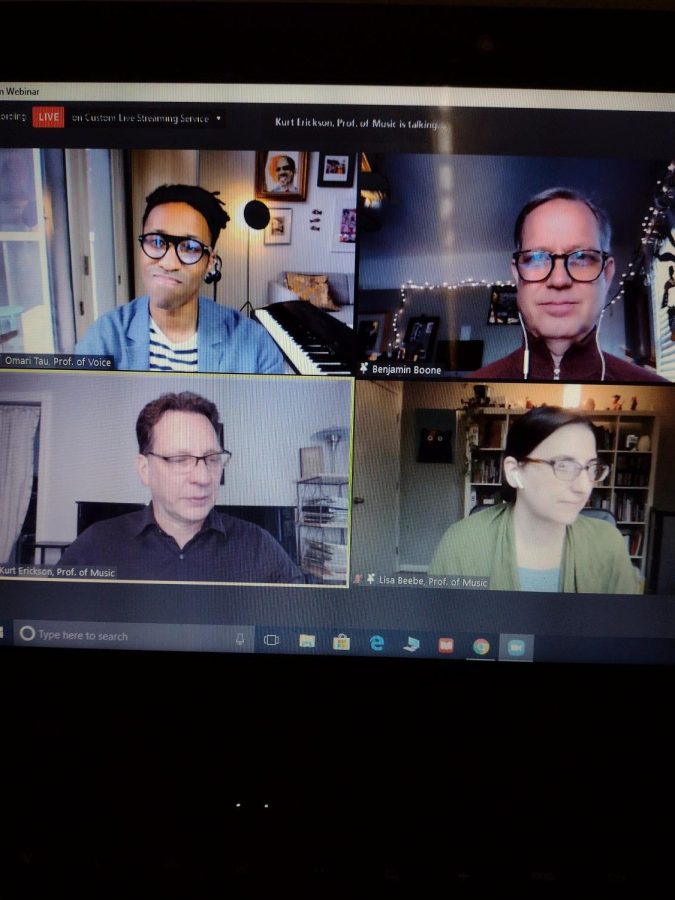 The “In the Studio” series presented Fresno State University’s Music Professor and Saxophonist Benjamin Boone on Friday, where he shared his work of jazz music through video clips to students and staff.
In the event, hosted by Music Professors Omari Tau, Lisa Beebe and Kurt Erickson, video clips of Boone’s work were played, and he talked about the collaborations he had with other poets. The clips shared were “The Poetry of Jazz,” “Palin Song” and “That’s My Son There.”
“All in my career, people were saying, ‘why don’t you focus on practicing saxophone? You could be a really good saxophonist,’ as my saxophone teacher would tell me,” Boone said. “Any good thing that’s happened has happened because of that work ethic and because I’m a lifelong learner.”
In “The Poetry of Jazz,” Boone said he collaborated with a former U.S. Poet Laureate Philip Levine because he loved his poetry and tells stories with a deep meaning.
“What I’ve tried to do with Philip, is that the music in the poetry are equal partners, and there’s a synergy between them,” Boone said. “I was trying to set the spoken word as if it were a musical instrument, and I tried to make that work with the music and the music work with the words, rather than merely reacting to the music or making it like it was in a film.”
Erickson said Boone’s collaboration with Levine for “The Poetry of Jazz” was amazing.
“The synthesis between the stories, his voice, the music, it can be a little cliche, but it just captures the stories in your other tracks,” Erickson said.
After clips of “The Poetry of Jazz,” Boone discussed the rhythm of music and how the English language is an isochronous language, which are words that are the most meaningful in a sentence and are equal.
“The essence is that speech actually is music, and it forms rhythms, meters and pitches,” Boone said. “That’s the power that the rhythm of speech has, as it aligns with body movement, it’s a channel of nonverbal communication.”
The next clip that was shared was the “Palin Song,” which was about former Gov. of Alaska Sarah Palin of how she’s switched topics as she speaks, and not staying on track and how her speech can be conceived as music.
Tau said he was fascinated by the “Palin Song” clip of how staying on topic can change abruptly, then can go back and switch again.
“I was thinking about a drummer named Anthony Ty Johnson, who’s just doing this with drums, there are some neutral guitarists who’ve been doing this, and it’s really exciting cause you can often hear the rhythmic element,” Tau said.
The last clip that was played was a poem called “That’s My Son There,” which was written by poet Patricia Smith, and Boone also collaborated with her on it about police murder and how the perspective of a mother saw her son and was killed.
“We need to globalize our curriculum, we need to include women, we need examples of music from around the world to show our students that music is worthy of study,” Boone said. “That’s what this project is, it’s a wide diversity of 11 poets that have a number of different perspectives and come from a number of different cultures.”
Tau said the collaborations between poetry and the different arts could seem artificial.
“I think part of that feel from your allowance or decision to make sure that the voice and the reading of the poetry are equal in a different kind of way,” Tau said.
Besides sharing his music, Boone concluded there are many risks that people take in life and some people fail, but it’s important not to give up.
“Courage is walking through fear, so you take a deep breath and bringing it back to the word passion,” Boone said. “You’ll make a mistake, but so what, you’re trying to learn how to be better.”
For more information on Benjamin Boone’s music, visit his website here.