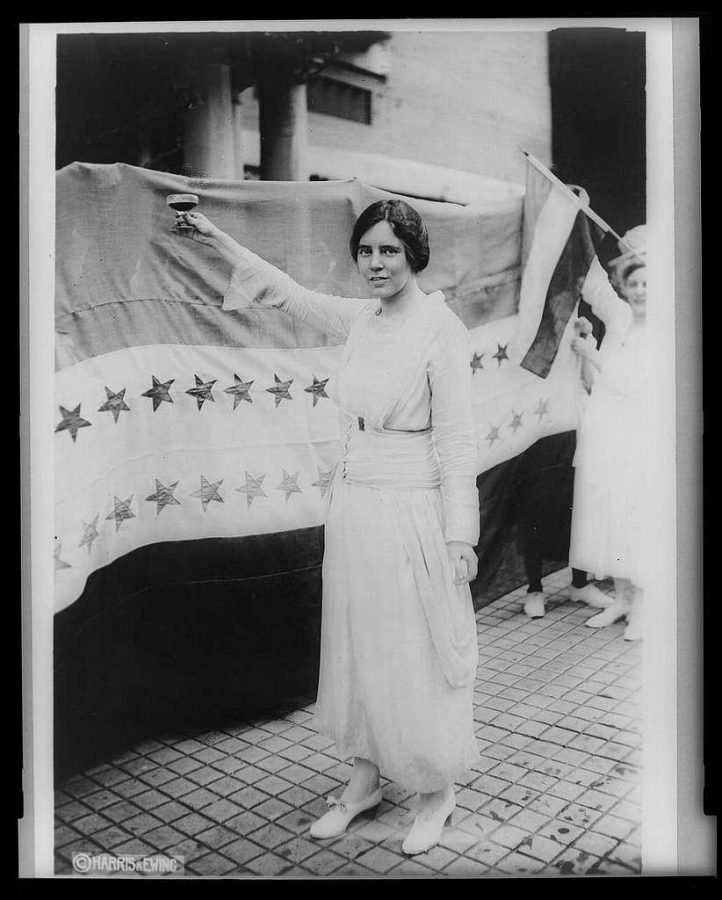 Photo of women's activist Alice Paul. Paul was a prominent figure in the fight for women's suffrage.

History professor Diana Reed and Radio, Television and Film Production professor Lauren Wagner hosted the Women in Film Presentation: Portrayals of the Enfranchised Woman on March 18.
The event featured a total of three clips, one from the film “Iron Jawed Angels,” “Selma,” and the “Sisters of Selma documentary.”
The event started with a clip from the 2004 movie “Iron Jawed Angels.” The movie is based on the American women’s suffrage movement of the 1910s with lead actress Hilary Swank as Alice Paul. Paul was one of the prominent leaders and strategists of the campaign for the nineteenth amendment. The film depicts the struggles and sacrifices that women made during the movement.
Women did not only fight for the right to vote. “You want a place in the trades and professions where you can earn your bread. So do I. You want some means of self-expression. So do I,” Paul said. “You want some way of satisfying your own personal ambitions. You want a voice in the government under which you live. So do I.”
There are many powerful moments in the 13-minute clip, and it prompted a passionate discussion.
“Women in some states did have voting rights, but not throughout the country,” Reed said. “It wasn’t just voting rights; there were very few legal rights that women had as far as being able to testify in court, being able to own property… there were certainly a lot of limitations on the legal rights that women could exercise.”
Although the 19th amendment granted women the right to vote, it failed to include Black women. During this time, discrimination was still rampant in certain areas, making it very difficult for Black women to register to vote.
Those issues are addressed in the second clip from the 2014 movie “Selma” and in the third clip from the 2007 documentary, “Sisters of Selma.” Both clips focus on the suppression and oppression of Black voters.
“Everything was to the satisfaction of the registrar, and they had the power to grant or deny you this right,” Reed said.
Unfortunately, these issues are still present today. In the last couple of years, minority communities have been targeted. Some states closed hundreds of polling places, cut back on early voting, and various states have also introduced bills aimed at election procedures and restrict voting rights.
Women’s History Month is a reminder of the struggles women faced to have today’s rights.
”I feel that as a woman, living in 2021, that there is a responsibility for the people who went before and what they had to sacrifice and what they did for the rights that I have now,” Wagner said. “It is really important to reflect upon and to honor by doing my part and for all of us doing our part engaging in the civic responsibilities that we all have.”