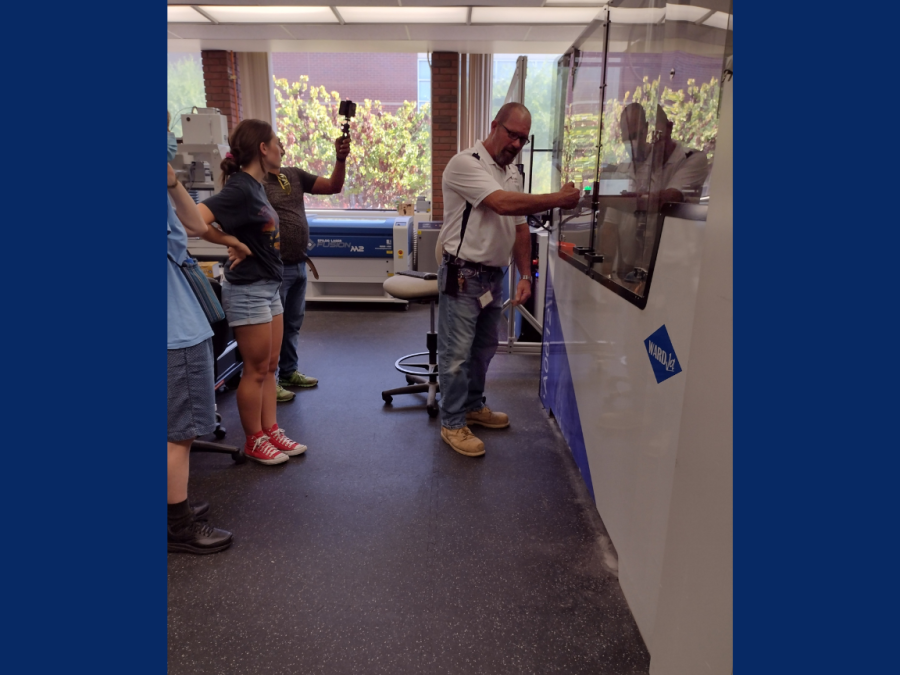 A hybrid workshop was held on Thursday to introduce a new facility called the CRC Makerspace, which has advanced manufacturing equipment. Construction Professor Ryan Connally gives a tour of the CRC Makerspace and he is showing the attendees the waterjet machine.

A hybrid workshop was held on Thursday to introduce a new facility called the CRC Makerspace where students can use advanced manufacturing equipment to make wooden projects and many other things.
The CRC Makerspace, which opens Aug. 23, has equipment that includes a waterjet, a wood room, 3D printing, laser printing and an electronics station. There is also a textile room, which consists of a cricut machine, sewing machine, a custom embroidery machine, a leather station, stained glass station and poster printing.
“Los Rios has supported Makerspace development at all four major campuses, and luckily enough here at CRC, we’ve had a lot of folks making sure that the money gets down and developed into this space and I’ve been lucky enough to be here from the beginning,” said Construction Professor Ryan Connally.
The hybrid workshop was facilitated by Connally and Makerspace Lab Technician Eddie Maximo.
During the workshop, Connally gave a tour of the CRC Makerspace facility. He demonstrated how each of the machines worked and made a few things from them, such as a wooden box and a wrench.
Connally said the textile room has less steel and wood and more cloth, leather and glass.
“You can still make a lot of stuff here, they’re kind of organized by material that you work with,” Connally said.
Connally said the CRC Makerspace is open to all students and staff as well as to the two modern making classes this semester, which are MAKR 140 and MAKR 151.
“We’re looking to have the Makerspace open Tuesday, Wednesday and Thursday from 8 a.m. to 1 p.m. is the initial open door, and Eddie’s working on the protocols for tracking students or employees and tracking who’s been trained in what equipment because what we can’t do is let people just come in and start pushing buttons,” Connally said. “We’re gonna have like little orientations and individual trainings for the various equipment.”
Connally said there will be a check-in station for students.
“If you say, ‘Oh, well today I want to learn about the 3D printers,’ then maybe we’ll have an online video or something that will kind of orientate you,” Connally said. “Most of the things in this room require some kind of computer file that then gets put into the equipment.”
Maximo said students can use the materials available to them at Makerspace and they can also bring their own materials.
“I hope that they understand that though the machines or at least the technology is advancing, it’s not out of reach for them and that they’re able actually to apply like, ultimately apply a lot of theories that they learned and actually put it in something practical, like whether it be creating something as simple as a wrench or a box,” Maximo said. “If you want to create something, just go ahead and try it.”
Psychology Professor Naomi Bahm, an attendee of the workshop, said that it’s really cool to have access to expensive equipment that could do neat things with different products.
“Students who have research or some other things they need to present somewhere, they can actually come and get it printed out,” Bahm said. “People should come check it out during the open hours and see what’s here.”
The CRC Makerspace is located in the technology building in rooms T-116 and T-117. Their drop-in hours are Tuesday to Thursday from 8 a.m. to 1 p.m. and Fridays from 2:30 to 5 p.m.