Spring finals, summer session, fall semester and beyond at CRC 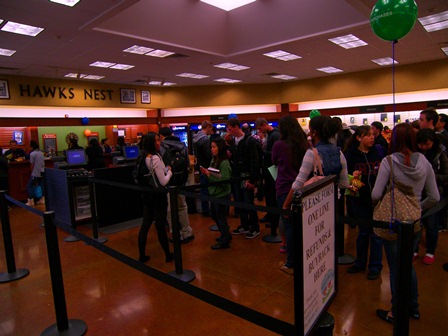 Student's waiting in line for textbooks at the start of the spring 2012.

It’s mid-April and students are already on the home stretch to summer vacation and planning for the fall semester.

Many students received acceptance letters from state colleges and universities. Others are continuing their education here at Cosumnes River College.

Budget and department cuts haunt many students going forward and frustrate some professors.

“Students are at a disadvantage,” Spanish professor Blanca Gill said in regards to cuts.

The Spanish program at CRC offers less classes now than in 2002. The summer Spanish program has been cut by 50 percent last summer, resulting in fewer sections. Further cuts this summer leave only one Spanish class.

“If they (students) want an A.A. in Spanish, they might have to go to another school to get the classes they need,” Gill said.

There is no way to know at this point if more classes will be cut in the future, CRC Public Information Officer Kristie West said. “A lot will depend on the budget situation.”

Spanish professor Gabriel Torres hopes the government initiatives to increase revenue will pass so that community colleges can get more money and higher education can continue to be available for everyone.

“Students need to get involved and vote,” Torres said.

In the meantime, students will be paying $46 per unit beginning this summer and crossing their fingers in hopes they’ll get into the classes they want.

Students’ financial aid for the 2011-2012 year will also cover the summer semester. The new financial aid year begins in fall 2012. The financial aid office will be open most of the summer, and the hours are available on the CRC website.

“I would recommend registering for classes as soon as they can,” West said. “The class schedule is online so students can begin to look for the classes they want and alternative classes in case their first choice is already full.”