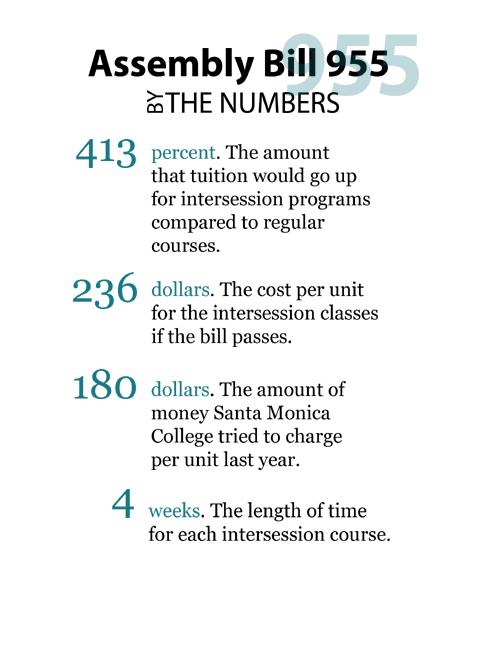 Last year, Santa Monica College tried to implement a two-tiered system of class offerings to students, where students would be given priority enrollment if they could pay $180 per unit for required classes.

This year, while still in its early stages, Assemblymember Das Williams (D-Santa Barbara) introduced Assembly Bill 955, which will legalize intersession extension courses, which are offered outside of normal course offerings, according to the bill’s text. 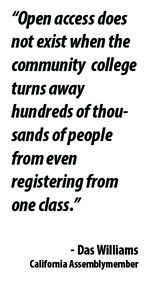 The bill made it through the higher education committee on April 9, as well as the Appropriations committee on May 1, according to The Modesto Bee.

At Cosumnes River College, the classes would be offered at the same rates as non-residents, which is at $236 per unit, according to college president Deborah Travis.

“The purpose is to partially restore access to classes at the community college system,” Williams said in an interview via phone. “Open access does not exist when the community  college turns away hundreds of thousands of people from even registering from one class.”

Williams said that his bill, in combination with Proposition 30 and “every year pushing for a little bit more from the state budget,” has the possibility of restoring classes to “a semblance of what they should be.”

Proposition 30 passed in the 2012 statewide elections, and the measure raised sales tax by a quarter of a penny, as well as income taxes on those with annual incomes of more than $250,000. This move by voters spared California community colleges of $338 million in cuts, as well as increasing revenue for the colleges by $210 million, according to the Official Voter Information Guide.

Opponents of AB 955 have cited the proposition as a reason why the bill is unnecessary.

“Proposition 30 is gradually leading us back to where community college funding needs to be and while it may take several years to restore full funding, I don’t think our students should have to pay exorbitant rates in the meantime,” Travis said.

History professor and campus president of the Los Rios College Federation of Teachers Jason Newman called Proposition 30 “the stake in the heart of this thing [AB 955] already, before it is even born.”

The Los Rios Community College District as a whole has taken a stance against the bill.

“We have consistently opposed legislation that would lead to charging higher fees to certain students,” said the LRCCD Chancellor Brian King.

A spokesperson for California Community Colleges Chancellor Brice Harris said to the L.A. Times that the two-tiered system of education would limit open-access to colleges.

King elaborated on the idea, saying that a “major concern” is that the legislature would give even less funding to community colleges. 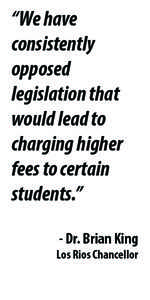 Williams responded to his critics by saying that the current situation is limiting open-access more-so than his bill would.

“I would say that open-access is much more compromised when you turn away 500,000 people than when you offer people the choice of taking a course during winter break for a little bit more money than they would otherwise,” Williams said.

Sylvester Charles, a 19 year old psychology major, said he is unsure if he would be able to pay the course fees, but that he would be willing to try.

“If I really had to take a class, I would take it,” Charles said.

Williams said that the “knee-jerk reaction” against the bill is due to last year’s opposition of Santa Monica’s plan.

“We changed the bill considerably compared to what was introduced last year, and we have stronger protection to protect the basic services that community colleges provide,” Williams said.

Williams said that three changes were made: that extension courses could not be offered when normal courses are being offered, a scholarship program would be set up for students who could not afford the classes and it would be illegal to replace subsidized classes with extension classes.

King said that he was unsure of the timeline of the bill, but said it could take effect in 2014-15 if it passed.

“I think we [Los Rios] would be reluctant because we are adding classes for students and if the law were passed, we would at least have a discussion with our faculty about whether they had any interest, which would require changes to our existing faculty contract,” King said.

Newman said that the bill would also create a two-tiered system among professors.

“If they created this intersession, they would jack up prices for the students in the intersession and they would lower the pay they would give to us as instructors,” Newman said. “So because of that fact, it would be part-timers who would take this job, full timers would say ‘no.’”

As a whole, Newman disagrees with the idea of intersession courses, and said professors have a hard enough time teaching during shorter sessions.

“The short nature of the intersession course, four week course, in and of itself is a poor way of teaching a subject,” Newman said. “Four weeks is too short. Six weeks, is a summer session, is short enough. Eight weeks is about right … So you’re paying more and you’re getting less.”