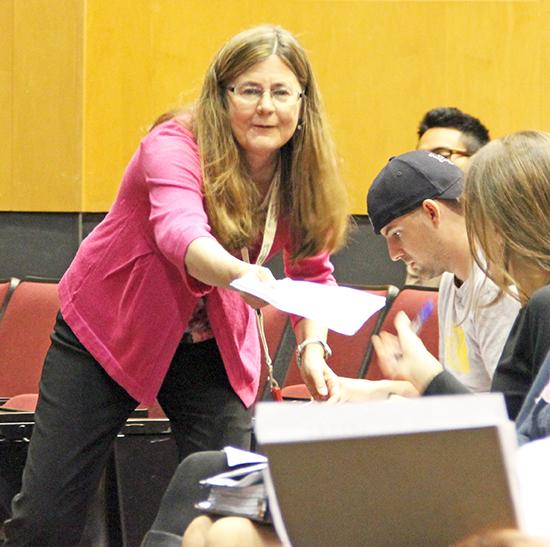 Psychology Professor Jeanne Edman educates students on the "toxic food environment" of the United States during the “Eating, Exercise, and the American Dream: The impact of striving for the perfect body” lecture on Sept. 29.

Students eager to learn about the increasingly high levels of body dissatisfaction both in America and across the globe filled Cosumnes River College’s Recital Hall on the afternoon of Sept. 29.

The lecture, titled “Eating, Exercise, and the American Dream: The impact of striving for the perfect body”, was hosted by psychology professor Jeanne Edman and covered a wide range of body satisfaction topics. The lecture tackled not only obesity, but other body satisfaction issues such as anorexia, bulimia and the concept of body perfectionism: the quest for the perfect body.

“When you have the horrible food environment that we have, especially certain people pay a really big price for it; and that’s the people who have the genetic predisposition to be heavy,” Edman said.

Emphasized in the lecture was the culture, predominantly in the United States, that creates a “toxic food environment.”

“People are told to eat, eat, eat, but don’t become heavy,” Edman said, citing the predominance of cheap, unhealthy foods and a standard of beauty that emphasises being thin.

“There are people that are in certain groups that really have to watch out so they don’t fall into the traps that are out there, the toxic food was very eye opening,” said Harlan Brakely, a 50-year-old studying general education.

Others in attendance shared similar sentiments, saying they had learned much from the lecture.

“There are a lot of different ways to look at the obesity epidemic. You can look at it through socio-cultural aspects, there is psychology, there is medicine, and the biology aspect,” said David Patron, a 24-year-old who recently graduated with a degree in psychology.

The event was one of many that tied into CRC’s OneBook for 2013, “The Omnivore’s Dilemma” by Michael Pollan.