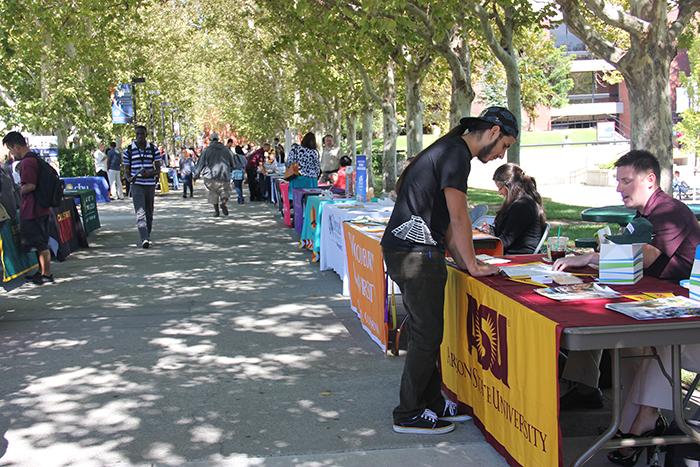 Students who attend Cosumnes River College visit the tables set up by various four-year colleges in preparation for transfer at the fall Transfer Day Fair in September 2013. Attending a two-year college similar to CRC gives students a leg up educationally and financially when they transfer to the next level of education.

At four-year colleges across California, in 2012, 52 percent of students had an average of $20,269 in debt, according to the Project on Student Debt.

With lower tuition and fees, two-year colleges may be the answer to avoiding serious debt.

“I believe that, for [Californians], it’s very good,” said Financial Aid Supervisor for Cosumnes River College Yolanda Garcia. “Some other states charge a couple hundred dollars a unit for their community college, so I think it’s very affordable.”

Out of ten CRC students interviewed, only one needed student loans to pay for their tuition. The rest said they used the Board of Governors Fee Waiver or other forms of student aid to cover the price of their tuition.

“All of my college classes this year are pretty much covered by the BOG,” said 19-year-old Anthony Delise, an undeclared major. “My friends were like, ‘sign-up for the BOG and it’ll take care of most of your classes.’ After that, each class was about two bucks.”

So far this school year, Free Application for Federal Student Aid and BOG fee waivers have nearly matched what previously took an academic year to achieve, which is about 25,000 and 15,000 applications respectively, according to statistics provided by Garcia.

Financial assistance covering the cost of community college allows students to avoid the debt of going straight to a four-year college and needing to take out student loans.

“I’ve seen … students who are academically ready, but financially not, so they stay at community college and save up a few bucks to get ready for that next two years after transfer,” said Emiliano Diaz, the director of the admissions office at Sacramento State.

“I’ve seen a lot of kids who do have the financial wherewithal to go straight to the four[-year college], but end up choosing a community college for what it offers there,” Diaz said. “In terms of giving yourself time to consider what you’re going to major in; giving yourself time to get yourself acclimated to the rigors of a college experience.”

Dan Vasquez, a 40-year-old computer science major, said he is in debt from student loans.

“I think you have to evaluate [a loan],” Vasquez said. “Crunch the numbers and you have to see if it’s going to work out for you. If you can’t pay your bills I would probably do it. You have to weigh the pros and the cons and see if it’s for you.”

Those looking to transfer to a four-year college can further reduce the cost to themselves. Many California Universities offer a program called the Blue and Gold Opportunity Plan.

It covers the tuitions of students whose families make $80,000 or less per year if they plan to go to a university, according to the University of California website, while a state college can be cheaper than transferring to a university.

“Most students that qualify for BOG end up qualifying for the Blue and Gold Opportunity Plan,” said Karlos Carter, a representative for the University of California, Davis. “I wouldn’t generalize it because there are a lot of transfer students that do not take advantage of the many opportunities that are available to them. They could very well have an easier process financially if they were as resourceful as they should be.”

The two-year college not only prepares a student financially, but prepares them for a four-year college and can provide skills applicable for a career, according to the College Board.

“Eventually, when we get the job we want, that’s going to be our reward,” said Rebeca Orozco, 19, a liberal arts major.