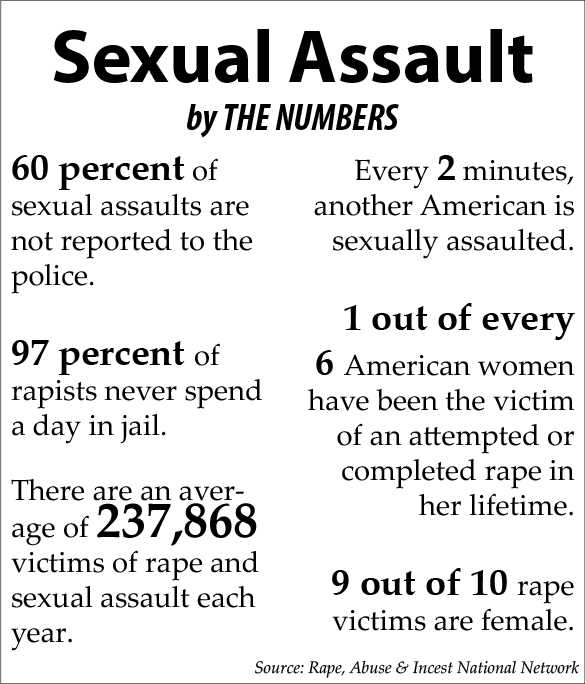 A study of college-age students found that 35 percent of college men anonymously admitted that under certain circumstances, they would commit rape if they could get away with it, according to Four In One USA.

These statistics are the result of a phenomenon called rape culture.

Rape culture is an environment in which rape frequently occurs and sexual violence against women is normalized or rationalized, and perpetuated in media and society in ways that may be difficult to notice.

For example, the language of rape and sexual assault casually used to describe a loss on the sports field or in video games, or a joking threat.

“The ideas associated with rape are promoted throughout our American culture,” said Nyenbeku George, a Cosumnes River College professor of sociology. “We have to look at it in terms of…what normal conversations like that have to do with promoting rape. Using the terms so normally, to where we desensitize ourselves toward the language that is often very [much] a part of rape culture.”

Beyond the language of rape culture are the societal conditions that foster this outlook, including the unspoken rules and gender dynamics of social interaction.

Women are frequently subjected to unwanted sexual attention, from catcalls from strangers as they walk down the street to aggressive attention from men in social settings despite clear disinterest. Yet rape culture has normalized these behaviors and made them frighteningly acceptable, even commonplace to experience, said George.

“People feel like they’re comfortable enough to be like that,” said Kandice Jones, an 18-year-old undeclared major. “It’s not okay. It’s degrading.”

The university survey revealed that 43 percent of men admitted to using coercive behavior such as physical intimidation, ignoring a woman’s protest or using force to attain sex.

Rape culture is built upon more than just normalization of this behavior and these attitudes toward rape. Rationalizations for sexual assault and rape also play a significant role in the perpetuation of rape culture, George said.

“A lot of it is victim blame,” said Shanea Jones, 21, a nursing major. “I’ve heard ‘she dresses like a slut anyway, she was asking for it, she wanted it’, stuff like that.”

Numerous discussions with both men and women on campus revealed that many said that victim blaming is widespread, and often involves claiming that a victim had some responsibility in placing themselves at risk. They said this creates an environment of fear and shame that can lead victims to avoid coming forward or revealing what has happened to them.

“I would say it [victim blaming] is a common occurrence,” said Josh Greer, 19, a photography major. “I’ve had friends that have been through that, and they’ve never told anyone.”

Moreover, rationalization promotes continued myths, ignoring the fact that a vast majority of rapes and sexual assaults are carried out by perpetrators known to the victims, and often in close proximity or even within their own homes, according to the US Department of Justice.

Nor do these justifications address rape and sexual assault at the hands of family members, loved ones or friends, George said.

Drinking, walking alone or wearing certain clothing does not give perpetrators the right to commit sexual violence, but this culture of acceptance and justification continues to perpetuate these ideas, George said.

“Justifications are born out of ignorance,” George said. “They’re born out of male privilege, to not have to deal with that, to metaphorically change the channel.”

Women may feel pressured to give in to men, and men to aggressively pursue women despite protests and rationalize their behavior, George said.

“There needs to definitely be education for women and for men,” George said.  “Sometimes you could argue more for women, not because they are victims, but that so they can feel they have the fundamental right to say no.”