Students speak out with ‘Day of Silence’ 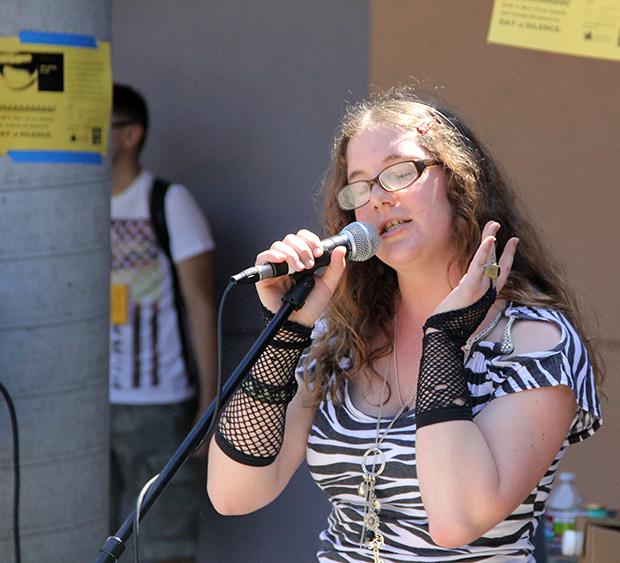 Cosumnes River College took a stand against bullying and discrimination during a Day of Silence on Wednesday.

The day was spent to protest the discrimination, harassment and abuse—in effect the silencing—faced by anyone because of sexual orientation, race, ethnicity, gender, religious affiliation, ability, veteran’s status or political views.  This event is sponsored by the Social Responsibility Committee, according to Heather Hutcheson via email.

The event took place in the music area of the campus and started at 9 a.m. with volunteers handing out fresh coffee and donuts as a way to attract students to partake in the event. Other volunteers were going around the campus passing out speaking cards, which explains a person’s silence.

At 1:30 p.m. participants returned to the music area in celebration of “Breaking the Silence.” During that celebration, students, staff and faculty were creating as much noise as they could; banging drums, shaking maracas and tambourines, singing and shouting.

Students were able to perform their own works in the form of poetry and/or song. Sarah Hibbs, a 19-year-old criminal justice major performed a freestyle in the event.

“My song was about how I’m bisexual and how I don’t care about what anyone says,” Hibbs said.

At the end of the event, English Professor Heather Hutcheson thanked the SRC committee, and all participants and students who attended the “Breaking of the Silence” celebration. She also encouraged students to partake in more SRC events as well.

As the music and celebration came to an end, Hutcheson encouraged students to stay after the event if they wanted to and continue to play their instruments.