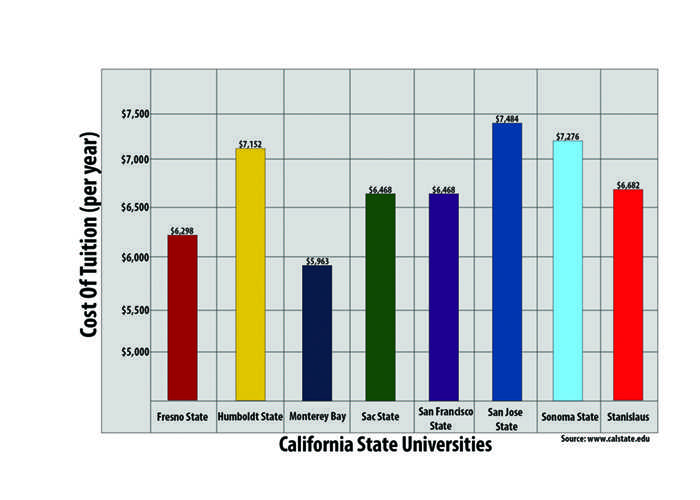 In the recent Congressional debate between incumbent Ami Bera and candidate Doug Ose, both candidates agreed that the cost of four-year colleges need to remain affordable. Bera said the cost of higher education in California needs to be brought down to an affordable level.

California State Universities in Northern California are considered to have relatively affordable tuitions, compared to the rest of the state, according to KCRA’s series “Chasing Paper.”

“If you look at CSU tuition and mandatory fees across the state, Sac State falls just below the average $6,695 with a total at $6,628,” said Assistant Executive Director and Chief Governmental Officer of the California State Student Association Meredith Turner via email.

“Another reason why school in Sacramento might be less expensive is due to cost of living,” Turner said. “Here, students can rent a room in an apartment [or] house for about $500 a month, whereas college students at San Francisco State University will likely pay at least double.”

Most CSU’s remain close to the state average for tuition and campus fees, with a handful of colleges over $7,000, including San Jose, Sonoma, Humboldt, San Marcos and San Luis Obispo State, according to the 2013-14 California State University Tuition and Fee Rates chart on the California State website.

“Affordable, for me, is not having to come out of pocket too much,” said Ricardo Lemus, a 29-year-old kinesiology major. “I don’t expect education to be free, but I also don’t expect to come out in $30,000 debt either.”

Lemus said he’ll support himself financially, after transferring, using financial aid which he feels puts him in a position where he’s “not going to come out in a huge debt.”

Most other students, such as Amanda Rydcynski, 19, an undeclared major, said it was common to see friends supporting themselves with loans.

Most University of California colleges’ annual tuition remain around the average of $33,000, according to the UC website.

Students aiming to transfer to a UC, including 19-year-old kinesiology major Mariana Hernandez, said they were hoping for financial aid and other benefits.

“For me, because I’m low income, I saw they have the Blue and Gold,” Hernandez said. “Tuition is too expensive considering I don’t work and only my mom works.”

The Blue and Gold Opportunity Program is a type of financial aid program provided to families in California attending a UC whose income is less than $80,000, according to the UC website.

Without these benefits, students said they couldn’t imagine being able to afford four-year education.

University of California Student Association President Jefferson Kuoch-Seng, who defines affordable as the ability of all students who want to attend a UC to have the ability to without barriers like student debt, said, via email, “UCSA is currently advocating for solutions that would decrease the cost of tuition at the UC.”

“However, there is a current lack of effort from the State and the University to solve this current issue of unaffordability,” said Kuoch-Seng. “In fact, there has been discussion that the University of California will raise the cost of tuition for the 2014-15 school year. This is unacceptable, as it will not only create additional financial burden for students, but it also contradicts the UC’s mission to provide quality, accessible and affordable public higher education.”

During the Congressional debate, Bera posed a question that contained a similar sentiment, “How did it go from $393 a quarter that I was paying going to a public university to what kids today are paying to go to medical school?”