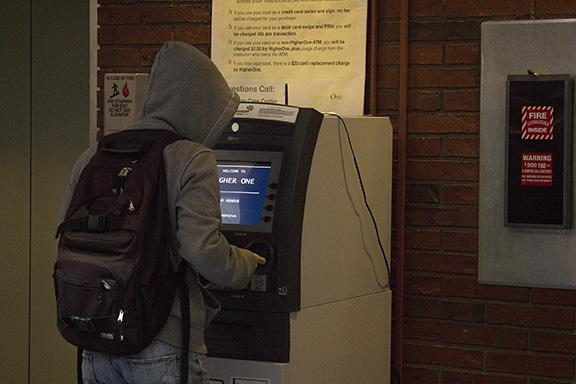 A student uses the Higher One ATM in CRC's library building. Some students have reported problems with the ATM working correctly.

Connecticut-based bank Higher One, the leading provider of campus debit cards according to the Huffington Post, is an organization that is very familiar to most Cosumnes River College students that use financial aid.

Even those that don’t use financial aid are likely to have heard of the controversy plagued bank either from the news, or potentially from the complaints of those students that use the bank and their ATMs.

The bank has battled various investigations and class action suits, including an investigation by the Federal Deposit Insurance Corporation which accused the company of violating college students’ consumer rights that led to an $11 million settlement in 2012, according to an article from the Huffington Post.

In 2013 they reached a settlement of $15 million to settle a handful of class action suits filed by students from various colleges across the nation that were compiled into one case, according to Inside Higher Education.

Plaintiffs in the case alleged that the company engaged in “unfair and unconscionable practices of automatically creating bank accounts for college students, depositing students’ financial aid funds into Higher One accounts without students’ permission, deceptively discouraging students from opting-out of such accounts and assessing deceptive and unusual bank fees on student accounts.”

Yolanda Garcia, the financial aid supervisor at CRC, said that the campus is aware of the various suits.

“Although Los Rios was not a party to the lawsuits and we are not aware of any Los Rios students being a party of the lawsuit, we are glad to see that Higher One is working with the Department of Education and Consumer Affairs in developing regulations through the negotiated rule-making process that share our interest in providing quality services to students,” Garcia said.

Class actions suits about deceptive practices are far from the only complaints students have. Part of the suits filed included the fees that are placed upon users of the cards.

When the Higher One card provided to students is swiped and used as a credit card there is no fee charged, but if a student chooses to use it as a debit card by using their PIN number they are charged 50 cents per transaction.

Other fees, all listed on the CRC financial aid page of the campus website, include $20 to replace a stolen or lost card and a charge for using non-Higher One ATMs which results in a $2.50 charge from Higher One as well as a usage charge from the other bank that the ATM belongs to.

“We are aware that some students are concerned with the fees charged by Higher One,” Garcia said. “On the college financial aid webpage, we have shared with all students methods on how to avoid these fees. Students are encouraged to visit the fee schedule on their OneAccount or on our webpage. This schedule provides methods for avoiding fees including the 50 cent debit fee charged at retailers.”

While there are ways to avoid the debit card charge, not all students are aware of this fact.

“I didn’t know it was charging me fifty cents to use it as a debit card,” said TJ Deed a 20-year-old business major. “I wasn’t informed about that till now.”

Others like John Nyman, 40, a communications major said they were aware of the charges. Nyman said he’s been using Higher One for two and a half years and had no problems, and he was fully informed about the charges that were possible.

“Yeah, and also if you use it outside third party places will charge more as well. It’s always a risk. If I use it at Wells Fargo or something I think it’s $3,” Nyman said.

Another issue reported by students is that at times the ATM has not worked or takes multiple times of sliding a card before the machine will allow them access to their account.

If the machine isn’t working, students have to use the other ATM on campus meaning they’ll potentially have to pay the outside Higher One charge. Another option is to travel to another Los Rios Campus, as each campus has one ATM and those are the only places Higher One can be accessed without a charge.

Currently the machine is working, and Deed said he’s had no issues with it since he began using it this semester.

“I’ve only been using it for a month or two, I just got my financial aid. It hasn’t been giving me any problems yet. I’m fine with it,” Deed said. “They helped me with everything. It took me awhile to get everything going but they helped me.”

Garcia said that if the machine isn’t working it is the responsibility of Higher One to fix it.

While there is controversy surrounding Higher One, Garcia said that the choice to go with the bank as the district’s go-to for financial aid came from input from the students and college and district staff.

“Students were surveyed for input and a committee representing all colleges and the district was formed to develop a Request for Proposal that was sent to many vendors,” Garcia said. “The responses from the RFPs were evaluated by a committee and different vendors were invited to present their services to the committee. After a careful review and analysis of the different services and cost offered by the vendors, the committee recommended Higher One to provide the disbursement options the students wanted.”