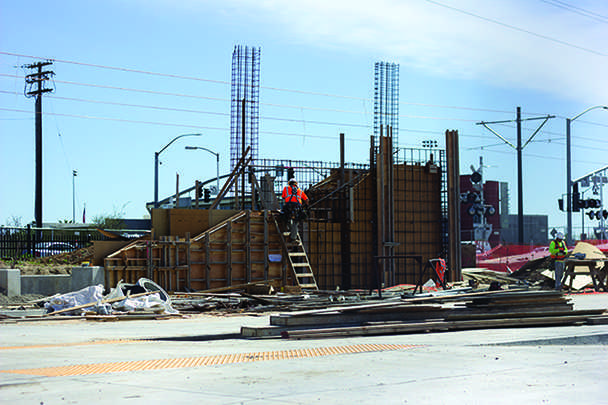 Construction continues on the Blue Line lightrail near CRC's east entrance. Students can expect to see the finished product by September.

For more than year, construction of the Blue Line light rail has been prominent in the East Entrance of CRC. Assembly of railway tracks and construction of new light fixtures now have an end date, Sept. 6.

“Construction of the the light rail extension to CRC is currently on schedule,” said Ed Scofield, director of project management for Sacramento Regional Transit District. “There haven’t really been any major obstacles during construction of this project.”

Now that construction has an end date in sight, some students are looking forward to the opening of the new light rail extension.

“It would be a lot easier to go in and out of campus when it is all done,” said Sasha Parker, 20, a communications major. “They made more lanes in the entrance and I think that will help during busy hours.”

“Ideally we’d like to open it a couple weeks earlier to coincide with the start of CRC’s fall semester,” Scofield said. “But there’s a lot that has to be done between now and then, so we can’t make any promises.”

Although an end date for construction may provide a sigh of relief, there is also a degree of uncertainty, some students say.

“I don’t know what traffic is going to be like when the trains start running,” said Brandon Reynolds, 19, a business major. “I saw that there are new train lights and when it goes on, that could really back up traffic.”

The light rail extension is meant to alleviate traffic congestion due to growth in the South Sacramento and Elk Grove area.  This allows for students who live in the Meadowview area a public means for transportation to CRC.

“I think it’s going to help with traffic,” said Johan Pablo, 28, an engineering major. “I would take this to school and I think less people will be driving to campus.”

No matter the effects the Blue Line light rail extension will have, students can now look forward to a definitive end to construction.

“Things have progressed smoothly up to this point,” said Scofield. “Thanks in large part to the cooperation and support we’ve received from CRC and the Los Rios Community College District.”