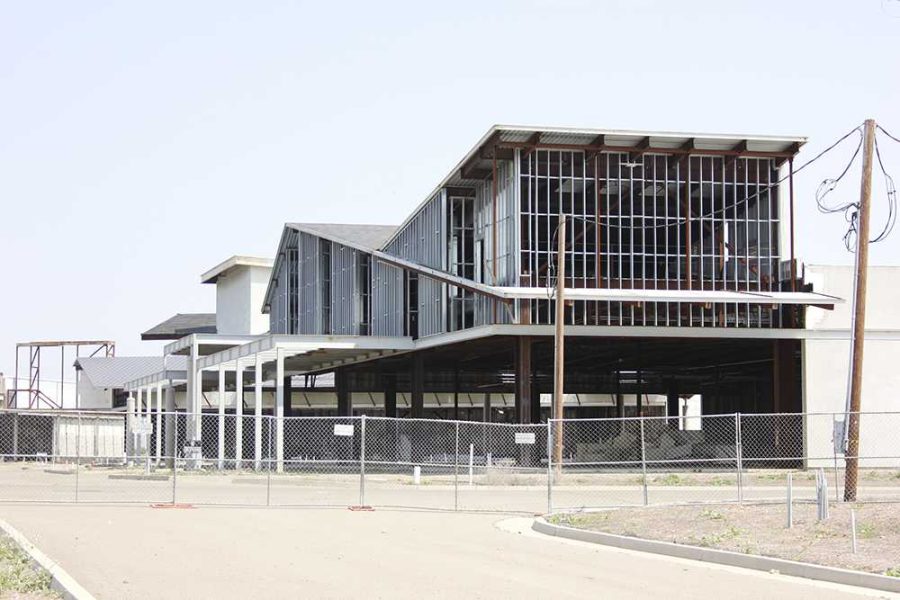 The half-built shell of the Elk Grove Promenade shopping mall has remained untouched since construction was halted in 2008. Now owned by the Howard Hughes Corp., the proposed shopping center faces further delays.

There have been hopes for a mall to open in Elk Grove since the early 2000s, and yet here we are in 2015 with the site for the mall still a vacant construction zone.

In October 2014, the Elk Grove City Council approved plans to revamp the long vacant mall project by the Howard Hughes Corporation, who now owns the land where the shell of the former planned mall still stands. Shortly after the city vote to move the project forward the company was sued by a competitor in November, according to the Sacramento Bee.

On Oct. 8 of last year, Elk Grove city councilman James Cooper made a statement about the then potential lawsuit during a meeting about the mall.

“We want to see it get done, bottom line,” Cooper said at the meeting. “And this litigation, all it does is cost a lot of money, and lawyers get rich.”

M&H Realty, the competitor who sued Howard Hughes Corp., owns the land around where the mall was set to be built and said that Hughes Corp. opening a competing project with what they are trying to do violates an agreement that the company made with city official in 2001, according to the Sacramento Bee.

The original project, called the Elk Grove Promenade, was spearheaded by General Growth Properties until the project went bankrupt in 2008 when the recession hit, according to the Sacramento Bee. The mall was going to host anchor stores like Macy’s and JCPenney and be a traditional mall allowing M&H to build big box stores and entertainment around them.

Jordan Greer, 21, a computer science major said that he has followed the project from its beginning since he lives close to the location.

“I remember first hearing about it when I drove past it,” Greer said. “It just looks like a complete shell of what it is actually supposed to be.”

The Outlet Collection at Elk Grove, Hughes Corporation’s vision for the land, includes some of the same things M&H was planning, which is where the lawsuit came from.

The Outlet Collection will be a “regional outlet center offering over 100 shops and restaurants along with a 14-screen movie theatre.  Designed as an open-air, walkable center with multiple open green spaces, outdoor dining and a children’s play area, The Outlet Collection at Elk Grove will be the ultimate shopping and entertainment destination of choice for Sacramento area residents and state Capitol visitors alike,” according to their website.

CRC students and Elk Grove residents said that a mall would be great for Elk Grove.

“All of us always have to go to Arden [Fair Mall] and Roseville [Galleria] and that’s super far,” said 18-year-old undeclared major Mariana Cardenas. “Honestly Elk Grove is growing more and more every day and they’re trying to make it a bigger city and a lot of people would go so it would be great economically too.”

Hughes Corp. Vice President for Development Mark Putney said that the mall will give Elk Grove’s economy a boost as well, according to a press release.

“Not only will the development be a desirable dining and shopping destination for the community, we also believe it will be a catalyst for future economic growth in the area,” Putney said.

Greer said that he would shop at the mall regardless of the activities and stores it ends up including.

“If they have like 20 Abercrombie and Fitch of course not, but seriously I’d shop there regardless of whatever they have there,” Greer said.