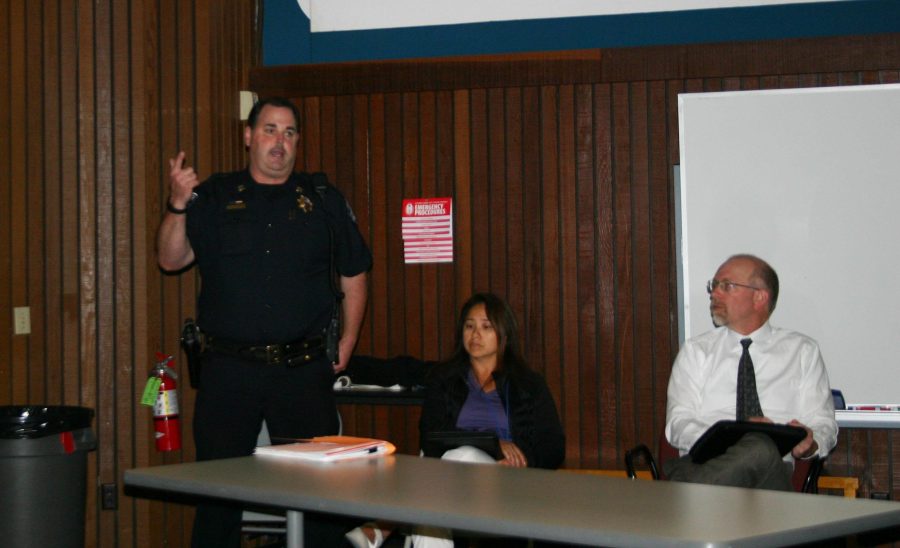 Faculty Union President Jason Newman started the open campus safety forum, held in the L-111 building on Thursday Nov. 12, by giving Cosumnes River College President Edward Bush an opportunity to speak to attendants. The forum was then open for questions and discussion.

An email notification was issued the morning of the forum confirming the arrest of the suspect believed to be the perpetrator of the sexual assault committed Oct. 26 in a men’s restroom on campus.

“He’s possibly being linked to additional crimes in the area,” Day said. The Sacramento Police Department will meet with the District Attorney to discuss additional details concerning the suspect’s charges on Nov. 13.

The suspect’s identity has not been released following this apprehension. The investigation of the crime remains ongoing.

“We’re extremely proud of our staff and grateful to Sac PD for working together to make this arrest,” Day said.

Faculty members will not have to install the icon. Wathen stated it will be sent out by administration as early as the morning of Nov. 16 or as late as Nov. 17.

Clicking on the icon twice is all that’s needed to send an instant notification to the district dispatch. The dispatch then contacts the campus police with details of who sent it and from where. Officers will then respond.

District-wide safety training for faculty is now being held every week. Each college in the district is rotating the training on a weekly basis every month.

Wathen said CRC’s training is currently being held during the third week of the month. Faculty have the opportunity to choose between workplace security awareness training or an active shooter training.

The focus of the training options were chosen based on survey polls taken by staff members. Wathen said the active shooter training was the most popular. Times and campus locations for the safety training are being sent directly to their faculty email accounts.

Professors continued to express concern over lack of police response on campus. An incident was mentioned where a non-student walked into a classroom and wouldn’t leave. Day said officers did make contact with that individual but dispatch is failing to follow up after calls are made in some instances.

Campus police have increased visibility on campus and in the parking lots with additional patrols but are still having trouble with meeting the number of officers the college really needs.

“We have about 15,000 students. We need 15,000 police officers on campus,” Day said. Day and Wathen both said the police simply cannot always be everywhere on campus.

Many officers leave the district when they’ve completed employment on campus to go to other departments. The LRPD also has a low number of potential hopefuls applying to become police officers.

“Our police department is making progress but staffing officers is a long process,” said Faculty Senate President Julie Oliver. Oliver mentioned she remembered that LRPD Chief Cheryl Sears had addressed during the previous forum about our entire region’s lack of individuals applying for careers in law enforcement.

There are faculty concerns regarding the amount of officers on campus at any given time, which is usually two, but they also have security patrols that help monitor campus, Oliver said.

“We’re doing the best we can with the tools we have.” Barkley said. “Students and safety are our priority.”

Police are hoping for developments with student volunteers to act as additional eyes and ears. Public Information Officer Kristie West said, “every improvement we make either benefits our students directly or indirectly.”

Day expressed it’s important staff and students both walk with a purpose when walking to their cars or anywhere on campus, don’t have their valuables accessible, put their phones away, awareness and vigilance are key, so stay to areas that are lit well and if possible to walk with other people in groups.

All of those things can potentially prevent anyone from becoming a victim in a crime of opportunity.

The number for campus dispatch is 916-558-2221. Once you hear the automated voice reception answer the call, press zero to speak directly with a dispatcher and avoid having to listen for options.

“Next one needs to be for students,” Newman said. Day expressed its importance for staff and students as well.

Bush stated that administration is working with the Student Senate to have a safety forum organized for students.