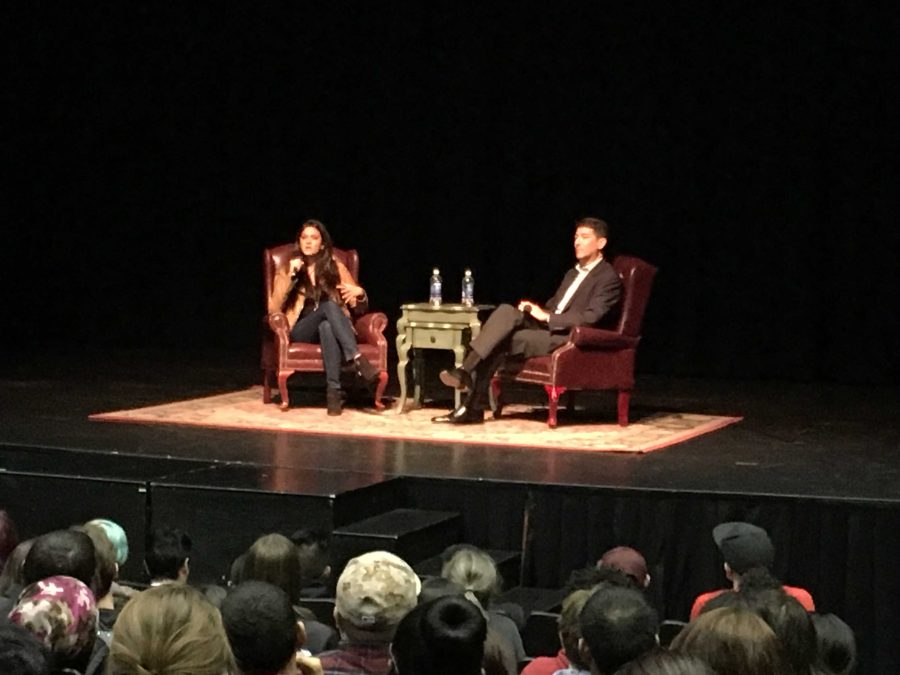 Diana Elizabeth Torres, left, sits with political science professor Martin Morales to answer questions students had about the film "East Side Sushi." Torres plays the lead role in the film as Juana, a Latina who becomes a sushi chef.

The Recital Hall was cool and inviting as an audience of students sat quietly in their seats to see the screening of “East Side Sushi” and to talk to the starring actress.

Martin Morales, a political science professor at Cosumnes River College and the host of the immigration crisis event, stood behind the podium and introduced the main actress, Diana Elizabeth Torres.

Morales read off an impressive list of film roles that the Latina actress had featured in just before he presented the movie. Torres had roles in films such as “Inherent Vice,” “Private Number” and made a brief appearance as a barista in a Jimmy Kimmel Live episode among other film and TV accomplishments.

Not only were audiences  graced with Torres’ presence, they were also able to witness a pre-taped interview between Morales and the Director of the movie Anthony Lucero.

“When I first met him I was impressed by how easy he was to talk to,” Morales said of the director. “I was really pleased that he was willing to help us.”

Morales, in the Skype interview, seemed relaxed and enjoying himself as he chatted away joyfully to Lucero. Among the questions concerning the movie, Lucero answered wholeheartedly to the inspiration behind “East Side Sushi.”

“They don’t show enough culture in the United States,” said Lucero in the interview. “I also wanted to tell an immigrant story.”

Lucero also said in the Skype interview that he liked to have two different cultures in his movies. Hence, the mix of Japanese and Hispanic culture that is presented in the movie.

Juana, the main character played by Torres, was an immigrant single mother dreaming to become a sushi chef but was met with traditional Japanese obstacles, one of which was that she, as a woman, could not be a sushi chef at the restaurant she worked at.

Morales agreed that “East Side Sushi” seemed to be a good advocate for the beginning of Women’s History Month.

“There’s nothing better to say than the message spoke to me.” Morales said. “I saw this at the Oakland museum last July, and knowing the CRC calendar of events I thought that this would be a perfect movie for Women’s History Month.”

Torres stuck around long after her one-on-one session with Morales and the audience. She gracefully thanked the students for coming to the event and even exchanged a few rapid words of fluent Spanish with Latino and Latina students.

Torres felt her performance was more for everybody, though the story was written specifically for a single Latina mother.

“Everybody relates towards it because it’s like ‘oh my god! I’m a single mom’ or ‘oh! I’ve been in that position!’ or ‘oh! that is just like my dad!’ so I think that applies for everybody,” Torres said.

When asked about the feeling of impacting her audience, Torres said that she herself loved feeling that way in the way her audience could feel about her acting.

“I love when that happens to me,” Torres said. “When I go and see a movie or I go to the theatre and you leave the room feeling different. Like having realizations, or an ‘Aha!’ moment or something that it just like change and touch you in a way that is just like ‘oh wow i have to make peace with my past.’ or ‘talk to my dad.’ or whatever you know.” Torres said.

Torres also said that the film itself was like this.

“And this story has that,” Torres said. “ It lifts you up at the end even, though it has its up and downs, but at the end it’s beautiful and it’s touching, and it’s moving, and I’m so glad that people feel that way.”