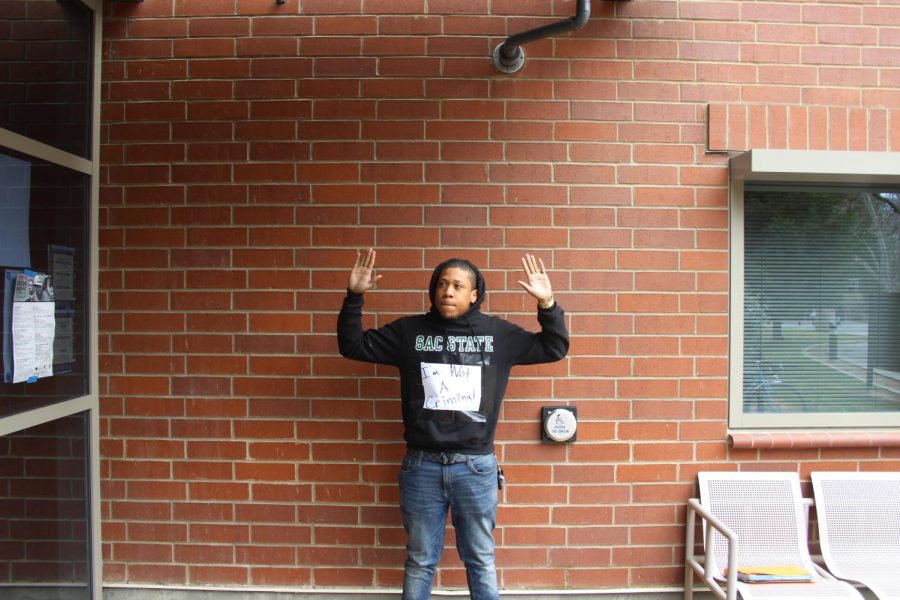 Anthony Lollis said he hopes his campaign provokes conversations around racism and discrimination.

Students noticed a man in a black hooded sweatshirt walking around campus on Feb. 26, wearing a sign with a simple phrase: “I’m Not a Criminal.”

Anthony Lollis, a 24-year-old communications major, was the individual behind this statement. Lollis is a student ambassador of cultural engagement for the Student Life & Leadership Center and cited many reasons as to why he wanted to do this campaign.

“What inspired me was the fact that just because you have a hoodie on, certain people will look at you different,” Lollis said. “You’ll be followed in a store and it’s because the color of your skin and you become a target.”

It was no coincidence that one of the days Lollis chose to wear his sign was on Feb. 26, the six-year anniversary of the shooting of Trayvon Martin. But Lollis was sure to mention that this campaign isn’t only about minorities.

“Black History Month is a major reason, but it’s also to show support for Trayvon Martin,” Lollis said. “And it’s even about John F. Kennedy and Abraham Lincoln, the ones who made a way for us.”

Lollis planned to wear his sign for the whole day, but was already receiving feedback and attention after a short time.

“A lot of people would stop me and look or read it while I’m walking away with wild facial expressions on their face.”

Lollis said that the main goal of the campaign is to start a conversation about these sensitive topics, no matter if you agree with his opinions or not.

“Slavery is always such a touchy subject but let’s talk about it,” Lollis said. “And the things that are very touchy, let’s go ahead and open it up.”

Freddy Mande, a 26-year-old computer science major and fellow student ambassador, commended Lollis for his efforts while recalling his own experience of being judged.

“While I was walking home one night, I pulled on my hood because I wanted to stay warm and these two girls who were walking toward me moved across the street like they were scared of me,” Mande said. “The thing is, I was just someone who was cold, you know?”

Mande is an international student who is originally from the Congo in Central Africa. He went on to mention how new this was to experience.

“Anthony tries to provoke conversations and questioning,” Peshkoff said. “The sign, especially in a time of racial hatred and bigotry, is a way of provoking dialogue about harmful stereotyping.”

Peshkoff recognized the importance of students vocalizing their views and examining their own beliefs.

“It is only through speaking with one another that one begins to question; questioning leads to profound examination of one’s own convictions,” Peshkoff said. “Personal growth is the end result.”

Lollis said he has no plans to continue the campaign until next February, but would reconsider if another shooting were to occur. In the meantime, he said he wants others to come forward and say something.

“It doesn’t have to be a black hoodie, it can be any kind of hoodie with a message on the front,” Lollis said. “Let your voice be heard.”