Students display presentation of how American culture affected them 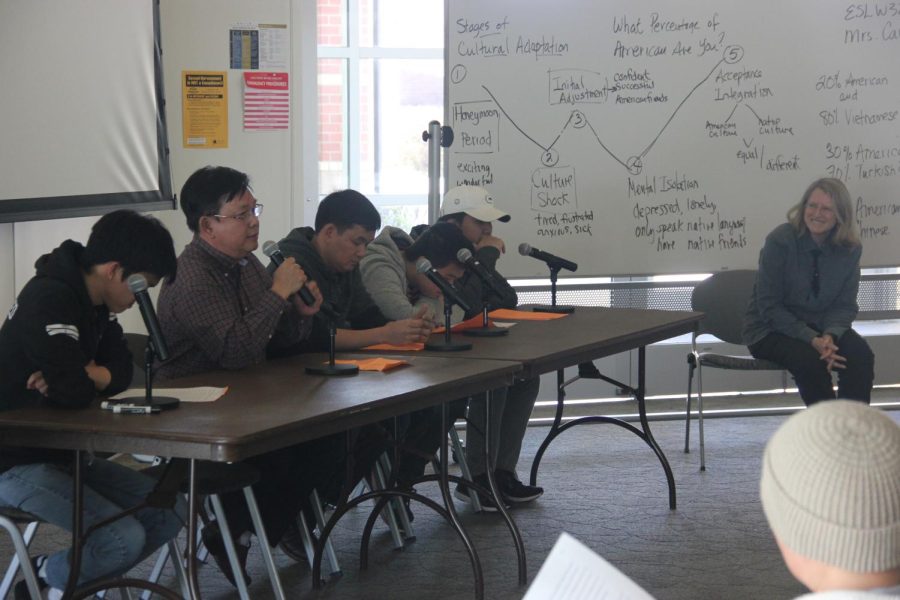 Student panel talks about their process of adapting by mentioning what stage of cultural adaptation they were at on April 12 in the Winn Main Center.

For April’s celebration of Asian Heritage Month, the English as a Second Language department hosted a student presentation presented by Professor English Sandra Carter on April 12 in the Winn Center.

The event, titled “What Percentage American Are You?” was a two hour and 15 minute presentation that allowed 19 students from her class to present their background. A full room of students came to the event.

“The purpose was to give the students an opportunity to speak about something that they know a lot about, for they are the experts about their own experiences of coming to America and adapting to the culture,” Carter said.

Five students per group had their moment to speak for three to five minutes about their five stages of cultural adaptation.

Cultural adaptation is a process for a person that lives in a new country where things are new and feels mixed emotions about the culture.

The honeymoon period is when a person is exposed to all the new things that America offers and is excited.

Culture shock is when a person is either frightened, tired, anxious and sick of being away from their own home.

Initial adjustment is when a person is now adjusting to be more confident and is more successful, and making new American friends.

Mental isolation is when a person feels isolated, upset and not being able to accept the new changes, or even trying to speak the language in America.

Acceptance integration is when a person feels that they’re equal and not feeling different based off of their ethnicity, and being a part of the American culture.

“Their experiences are normal, that they are going through a very normal process to realize that their journey was difficult yet interesting to discover a new culture in their own lives,” Carter said.

Khang Nguyen, 23, a marketing major and one of the speakers expressed his thoughts on adjusting to culture to another.

“I’ve lived in Vietnam for 18 years, there was a lot changes in my life when I came to America, and it was a new experience for me.”

Each person had a unique story of their travels on adjusting to live in America compared to their own country that they were from. At the end of their speech they notified what stage they were on.

Professor Minh Do brought her class to watch the presentation.

“Taking them was a good idea, because it engages them on getting closer to ones from their own race,” Do said. “They can learn what the new generation of American society is.”

Some of the speakers were not in the final stage of their journey because they were living in America, but it’s a new opportunity for them to become better.

The rest were happy because they were provided with an opportunity and being equal as an American citizen.

“It was an opportunity for the audience to witness the cultural adaptation process that theses students went through,” Carter said. “Presenting their information to others with courage, was an opportunity to express their journey.”