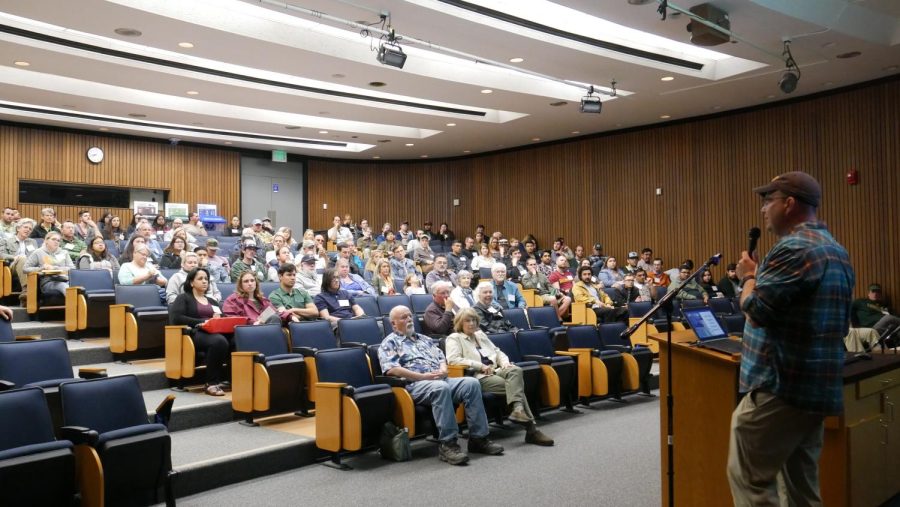 The California Geographical Society held its 72nd annual conference in CRC on April 27.

The opening of the conference was held for the second time since 1989 where all manner of geographers from California and beyond were in attendance.

“We get students and faculty coming from our community colleges throughout the state as well as CSUs and UCs also participate with us,” President of CGS and CRC Geography Professor Scott Crosier said.

The first day of the conference consisted of a barbeque in the quad where everyone got a chance to mingle. Dmytro Merezhko is a 20-year-old computer science major from Irvine Valley College who attended the event along with his friends and colleagues. He said that his interest in geography is what brought him to the conference.

“At the age of six or seven, my parents put a world map inside my room and that’s when I started learning where the different continents are, different countries and things like that,” Merezhko said. “I’ve never been to any sort of big geography conference, so that’s my main goal.”

Crosier said there are quite a bit of people who come almost every year for the conference. Some of the people that attend the CGS conference come from as far as Michigan.

“For the faculty, a lot of it is fellowship and camaraderie with our fellow geographers,” CGS Business Manager and CSU Northridge Professor Steve Graves said.

He also said that these conferences are like “family reunions” because he gets to see people that he hasn’t seen all year.

“When you think about a college, there aren’t necessarily a lot of geographers,” Crosier said.

The barbecue was followed by a keynote talk by Dee Owens from the Oregon-California Trails Association. The keynote was entitled “Discovering 1850s Overland Trails” and consisted of Gowens’ experiences rediscovering and preserving emigrant and wagon trails with OCTA.

She also invited people who are interested in joining one of their walks to sign up for the California-Nevada chapter of OCTA. For more information about membership and OCTA’s objective, go to their website at http://www.octa-trails.org/

“For those people that have ever planned a wedding, it’s like the mega wedding,” Crosier said.“I hope that students and the people who are participating have a positive time.”