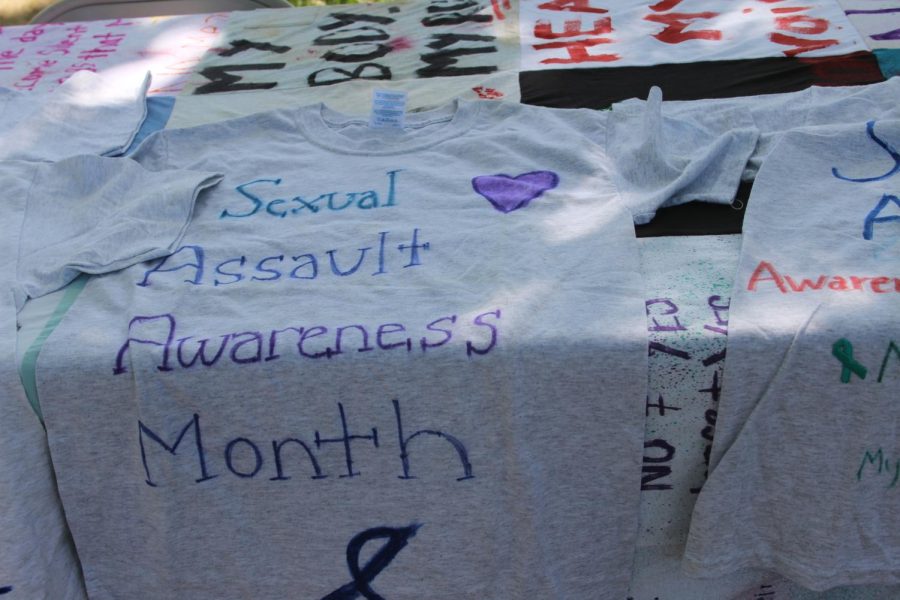 Students were able to write messages on shirts from a table by the quad.

April was Sexual Assault Awareness Month and in the wake of the Iris Perez’s story of being sexually harassed by a long time school counselor, students and the district are talking about what more can be done to make Los Rios schools a safe place for people to report cases of harassment.

Cosumnes River College held several events in April to raise awareness of the issue of sexual harassment and assault, yet none of the students interviewed were aware of the different resources available on campus.

“I’m pretty sure student services has something, other than that I don’t have a clue,” said Diego Hernandez, a 19-year-old psychology student.

Every student interviewed said that if they or a friend needed to report an incident they would go to the police. None of them mentioned the Woman Escaping A Violent Environment advocate Elissa Crandall on campus or Title IX officer Kimberly McDaniel.

“It’s important for people to know where they can go, I think a lot of people automatically assume their only option is to call 911,” said Shelby Vice, a WEAVE employee who held an event called “The Clothesline Project” on Wednesday. The event allowed people to design t-shirts to bring awareness or show support to survivors of sexual assault or domestic violence.

The Los Rios Administration has been making a push to make sure that campuses are a place where students feel comfortable reporting incidents of sexual harassment, but transparency about the process of investigations and visibility of the resources available, seem to be the major barriers for students who may need to file a complaint.

“Our investigators are very well trained,” said Ryan Cox, associate vice chancellor of human resources. “They are required by law to make a determination.”

There were three cases over the last five years in which a faculty member was found to have commited sexual harassment against a student. The district file states that “appropriate action was implemented” in each case but does not specify what the punishment may be.

Cox said that “the discipline will fit the behavior,” in cases of sexual harassment but could not give specifics because each case has so many unique variables. In cases of more serious criminal offenses, the police are notified and they take over the investigation.

Cox also stressed that the district has a very strong non-retaliation policy which anyone who files a complaint is made aware of right away. While all the district policies can be found online and in the college catalog, Cox said they are open to any other methods of making the information about the process of filing a complaint clearer, including the possibility of making statistics about the number of cases filed each year available to the public.

“I don’t know if publishing them would help,” said Cox. “The more we can get any information out about our sexual harassment, non-discrimination and non-retaliation policies, the better.”

While talking to students and the experts at WEAVE, it seems that having the conversation about how to report cases of sexual harassment may be the most important component to increasing the likelihood that a victim will come forward.

“Sexual harassment, rape and abuse of any kind are taboo in our culture, so we don’t talk about it,” said Jodie Reidreynoso, a 23-year-old deaf studies and social studies major who attended “The Clothesline Project” event on campus. “We try to help people but it’s really a hush-hush topic so it’s hard to let women or men know, who have been assaulted, how to get help.”

Vice agreed with that sentiment which was shared by other students as well.

“Any kind of outreach we can do is important, just so people know what their options are,” she said.