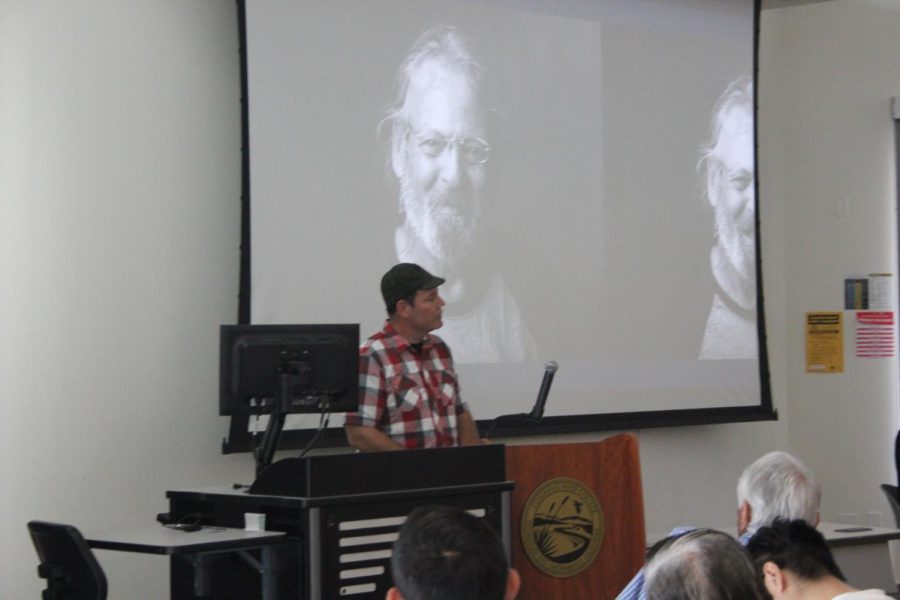 CRC student Doug Winter gives a speech about homeless people's lives to a crowd of people in the WINN Center.

A Cosumnes River College student presented a lecture in the WINN Center on homelessness in Sacramento on Sept. 26.

Doug Winter spoke to a group of about 100 of his peers about his experiences taking portraits of homeless people in Sacramento. The lecture consisted of a slide show of Winter’s eight portraits and a brief story.

“Nobody wants to be homeless when it’s December, 36 degrees and raining,”  said Winter. “Wouldn’t you want to be inside?”

Many of the stories that Winter spoke about included a father of two who worked in Sacramento and got assaulted by motorcycle gang members that bashed his head in, requiring a long recovery. He also spoke about a 22-year-old American River College student that has two kids who travels back and forth between classes and seeing them.

Winter said he started this project because a former CRC student asked if he would like to take pictures, where he volunteered at a homeless shelter in Sacramento. He said he was asked to take portraits for Father’s Day and had 30 or so people show up.

Winter said he was inspired to start taking more portraits and to add them to a blog after how well it went, to bring awareness to this particular topic that impacts Sacramento.

Winter said that through this project, he learned a lot about how easily people’s situations change and how easily it is to become homeless.

“The one thing that really surprised me was that homeless people have a bank account,” said Winter. “They get such little assistance, and most of it goes to rent or medications.”

“We have to get rent control in Sacramento,” Winter said.

Winter said he plans to self publish a book with his portraits and stories and give all the proceeds to the Friendship Park Homeless shelter. “Hope verse Hope, Vignettes of the Unsheltered” is the name of the photo project that is on his blog and name of his future book.

Khamisa Kever, a 19-year-old undeclared major said it was informative.

Kever said that he didn’t know too much about the information that was presented but because of what he learned he wants to be more involved and volunteer.

Communications Professor Nick Miller said that the event offered a different point of view that makes people empathize with others.